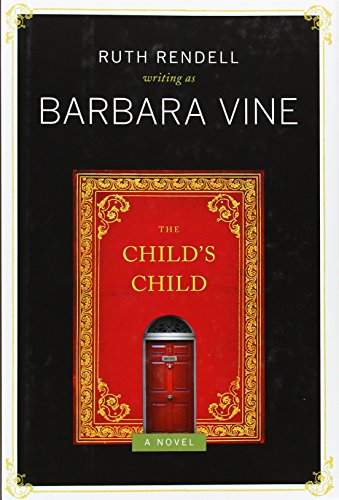 “. . . the author’s delightfully light touch ensures The Child’s Child engages the reader throughout.”

The Child’s Child is a booklover’s book on so many levels.

There are inherited book collections, acclaimed novelists (one dead, one living), unpublished manuscripts to be discovered—and of course the masterly hand of the novelist Ruth Rendell, aka Barbara Vine, behind it all.

The story begins with siblings Grace and Andrew Easton inheriting their grandmother’s book-filled Gothic home and deciding to live there together rather than selling up and splitting the proceeds.

But as we might expect, the tranquillity is shortlived with the arrival on the scene of Andrew’s boyfriend, James, who initially seems to take a dislike to Grace, though (without launching into a spoiler) he manages to successfully overcome that emotion.

Grace is teaching at university while working for her PhD on single parents—the politically correct term for unmarried mums (or dads)—in English literature.

At the same time, she has been asked by a friend to read an unpublished book written by his acclaimed novelist father. Coincidentally the subject matter of this novel is about an unmarried mother, Maud Goodwin, born between the world wars, and the relationships that shape her life including the one with her homosexual elder brother, John.

Two taboos, then, in the book within a book that are neatly reflected in Grace’s private and professional life.

Ms Vine’s characters are, like the novel and the real world, multilayered. There are times when the reader aches for the 15-year-old innocent, Maud, as she falls foul of the era’s moral code of sexual conduct.

We learn that a couple of escapades in a field after school have made secretly Maud proud. Having “relations with a man” is her deepest secret, one she believes has made her a woman. But soon, we learn “two things were due in her life, the visitor that was her brother, John, and the visitor, as her mother called it, that she and her friends called the curse.”

The latter does not arrive, and instead a baby is on the way. Slowly Maud evolves into a bitter young woman, and it is then that her character elicits contempt from the reader. The shameful treatment she metes out to her brother, who already fears worse than moral judgement for his ‘crime’ of loving another man, reflects the same stifling, self-righteous attitude of the era that she has been condemned by.

Maud’s own daughter echoes the nature-nurture debate, and illustrates how two sides of the same coin can be so close, yet so different.

The modern story feels less satisfying, perhaps because it is the fragmented start and finish of the book. Maud and Andrew’s story blossoms slowly in between while Grace and Andrew’s dilemma seems to come to a very neat, swift end.

Andrew is drawn as something of a stereotypical ‘gay’ man whilst Grace remains elusive as a character, less tangible to the reader. This perhaps comes partly because Grace sets out the thematic story at the beginning of the book and with much of it expositional, it diminishes her credibility.

But the parallels have been expertly drawn as the story evolves and shows the changes society has straddled in the past half-dozen decades. The level of coincidence between the two stories stretches credulity at times, but then who hasn’t said “you wouldn’t believe that if it was written in a novel”!

The concept of a book within a book is not unique, but the author’s delightfully light touch ensures The Child’s Child engages the reader throughout.