Children Under Fire: An American Crisis 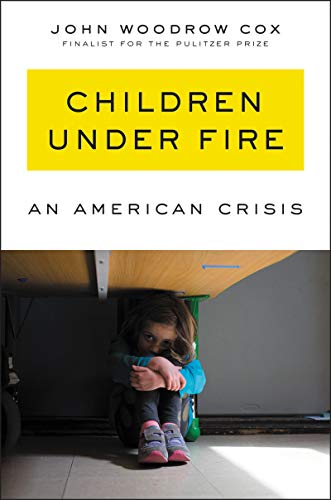 “at once painful to read but vitally necessary if Americans are to understand the ‘widely ignored’ epidemic that affects millions in ways we still do not fully understand.”

While his parents were watching TV in the living room, Tyler entered their bedroom, took the key from on top of the gun safe, and opened the cabinet, which contained several rifles and one loaded firearm, a .357 magnum revolver. He raised the pistol’s barrel to his temple and pulled the trigger.

Tyler’s father had never hidden the key to the gun safe from his son, explains author John Woodrow Cox, a Washington Post reporter. He didn’t think the boy had given him reason to. But his young son was thoughtful and intensely curious. And despite his father’s lessons on gun safety, Tyler toyed with the magnum and killed himself.

“There’s this mythical idea that you can teach kids to not want to handle a gun,” says Dr. Denise Dowd, a physician and researcher who has treated hundreds of pediatric gunshot victims. “You can’t train or educate curiosity out of a little kid. It’s not even an issue of being educated about guns. Their brain is not developed.”

In one recent year, nearly five million children lived in homes with at least one loaded, unlocked firearm, notes Cox. “Many Americans don’t lock up firearms out of ignorance, in most cases, or negligence, in some,” he writes.

Tyler is one of dozens of young children whose experiences of gun violence are recounted in this absorbing book—at once painful to read but vitally necessary if Americans are to understand the “widely ignored” epidemic that affects millions in ways we still do not fully understand.

The dead and injured children from headline-making school shootings—from Parkland to Sandy Hook—are all here. But so are many others whose lives have been shaped by gun violence.

Some are traumatized by gun violence in their neighborhoods and schools and the senseless loss of loved ones—parents, friends, favorite teachers. Constant exposure to gun violence can “disrupt a child’s brain development” and “inflict profound mental and emotional harm,” writes Cox.

“It’s not different than kids living in chronic war zones,” says Steven Berkowitz, a psychiatrist who has treated inner-city children contending with such issues. Many such kids live in a state of fear and hypervigilance.

The author spent months in intimate conversations with children and their families to write the newspaper series that led to this book. The children’s moving stories, together with views of experienced doctors and other experts, are likely to startle many readers, no matter where they stand on the gun issue.

In Cox’s view, the failure of many people to understand the “scope and ramifications” of the issue accounts for America’s inability to protect its kids. “Exorbitantly more people are killed by guns here because we have exorbitantly more guns—nearly four hundred million, by one estimate—and laws that are less effective at regulating them.”

The children who are killed or maimed represent only a small part of the problem. “Millions of children are affected every year,” he writes. They are “kids who weren’t shot and aren’t considered victims by our legal system but who have, nonetheless, been irreparably harmed by the epidemic.”

Even school lockdowns—“a staple of the modern American childhood”—take an emotional toll, leaving many children feeling depressed, anxious, or sleepless.

The author covers the nearly $3 billion school security industry, including one vendor who urges that former special operations agents be imbedded as school teachers. He emphasizes that little research exists (thanks to the gun lobby) for any understanding of ways to ensure student safety.

Cox also makes a powerful argument against the so-called natural resilience of children. Only children who get needed support have a chance of bouncing back, he finds.

There’s no cure for gun violence, but there are three things that can reduce the number of gun deaths, he says: background checks, education of gun owners to prevent children from accessing weapons, and more desperately needed research.

A strikingly empathetic, well-crafted report, Children Under Fire is an urgent call to sensible action on behalf of our nation’s children.