Children of God: A Novel 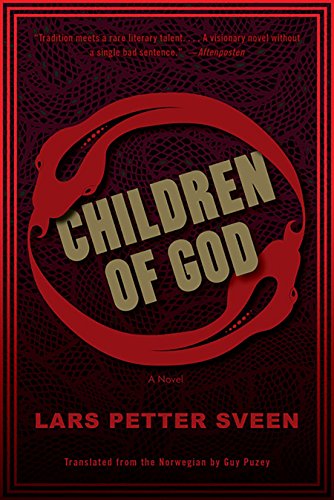 “Jesus turned to all the others gathered there. He raised up his hands and said, Demons have occupied this land, they’re the army of darkness. A legion of them is moving across the land . . . Their evil fills us until we can’t take any more, until we carry out the most abominable acts. Their darkness makes abode in us, their evil becomes our evil . . . I will drive out those demons. I say to you, I will push them out, I will throw them into the abyss.”

Lars Petter Sveen was named one of Norway’s ten best authors under 35 and has won numerous literary awards. Children of God is his first book to be translated into English (Guy Puzey) and was first published in Norway where it won the Per Olov Enquist Literary Prize. Thought provoking and reflective, Children of God sheds light upon obscure stories and people of the bible who have been marginalized. It gives voice to those living on the peripheries of the New Testament such as thieves, Roman soldiers, prostitutes, lepers, healers, and the occasional disciple. Sveen delves into well-trodden territory but delivers a marvelously refreshing and unusual fictionalized literary interpretation that’s devoid of judgement or preaching.

In 13 easy to read chapters Sveen explores such poignant story’s such as the detachment of Roman soldiers who question and hesitate to carry out King Herod’s decree to kill all the young male children of Bethlehem. Other accounts include a group of thieves who encounter no good Samaritans but themselves on the road to Jericho. While another follows a woman searching for her dead lover but cannot find comfort.

At critical stages throughout each of these stories evil appears, urging each of the characters to give in to their shadowy impulses. The battle between good and evil is never ending and as each of these uniquely intertwined accounts unfolds, the moral and ethical dilemmas never fail to surprise.

“We’d stared off counting all the children, but lost track of the number as the night went on. Our orders were hopeless: this wasn’t what we were fighting for . . . we’d been sent to this place at the edge of the Empire, where everything was so mixed up, so confusing . . . The chorus of wails had not died down and could still be heard like a wind blowing from the wilderness . . . but this was something different . . . It belonged to the wind or the rain or the sea or whatever grows in the depths below . . . We did whatever we could to put off having to shut our eyes and be left alone in the dark.”

Children of God brings the stories of the New Testament into a fresh light by focusing on the importance of storytelling as it relates to religious interpretation in the 21st century. Sveen is convincing and conclusive as he reflects on the challenges of traditional religious beliefs as they pertain to the neverending fight between good and evil. A truly spellbinding and original read that captures the chaos and confusion, as well as the fear and uncertainty that followers of Jesus experienced.