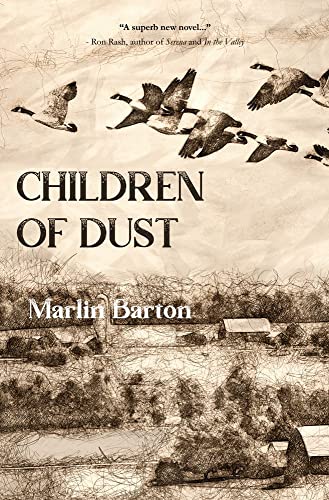 Marlin Barton has crafted a sensational new novel, Children of Dust, set in postbellum rural Alabama. A writer steeped in the best of the Southern tradition of William Faulkner, Carson McCullers, Flannery O’Connor, and others, Barton has placed several of his previous stories in and around the fictional Alabama towns of Riverfield and Demarville, near the Black Fork River. In Children of Dust, he brings this world into bold focus, populating it with well-developed characters who span the multi-ethnic extremes dwelling there.

The action is placed by several extended flashbacks. Two cousins, Seth and Charles, five generations removed from the central action of the novel, unite to explore and unravel their family history and to delve into what really happened to Melinda’s baby, who died suddenly little more than a day after he was born. Seth and Charles share the same great-grandfather, Rafe Anderson, a veteran officer of the Civil War, who is the central character in the novel. Seth is a descendant of Rafe and his white wife, Melinda; Charles' forbears are Rafe and Elizabeth, Rafe’s mixed blood mistress. The two cousins gradually open up to one another in ways that parallel brilliantly the exposition that forms the core of the novel.

In Children of Dust, Barton explores the complexities of interracial relationships following the emancipation of slaves in 1863, and that complexity is borne out in the actions of Rafe Anderson, whose ambivalence toward African Americans no doubt reflected that of so many whites who suddenly found themselves forced to co-exist on equal terms. Rafe is conflicted—at times revealed as a devoted husband and father, at others as abusive, violent, philandering. How Rafe manages his feelings and drives is the fulcrum upon which the action of the novel evolves, and Barton handles his characterization with a deft touch.

Barton’s use of language is rich with poetic figures, and much of it describes Rafe’s inner struggles: “Blood could leak on the inside, where all pain lived.” “Though he was married, with children of his own, Betsy was white-skinned enough that he claimed her, after a fashion, and in a manner that was not unknown.”

“With women you did what you wanted, and the only instinct that mattered was desire. You took from them what you needed, and they could respond as they chose.”

Once Rafe and Melinda’s newborn is discovered dead in his crib, the delicate balance allowing Rafe to continue his two affairs without interference from Melinda erodes rapidly. Rafe, in a conciliatory gesture, extends the privilege of naming the dead baby to Melinda. She in turn, having been abused by her husband, secretly names the child Jacob and enrages Rafe by refusing to tell him its name.

Much of the subsequent violence, though not all, is perpetrated by Rafe, but equally destructive is the psychological damage done by all the principals to each another. Near the end of the novel, Kate, the second oldest of Rafe and Melinda’s children, asks her mother, “Do you forgive him?”  The only answer Melinda can muster is, “I live with it.”