Children of Ash and Elm: A History of the Vikings 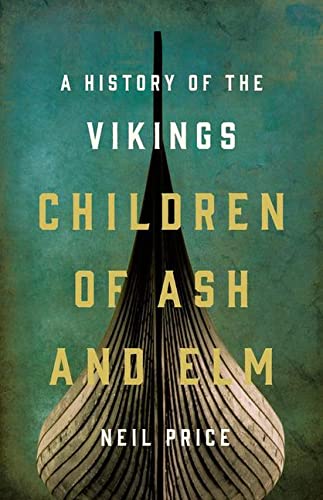 "Children of Ash and Elm is a thorough, readable, one-volume history of the Viking culture built on the documentary and on archaeology."

The word Viking means sea-raider. Between the eighth and 12th centuries, the Vikings "travelled through the territories of some forty-odd present-day countries, in documented encounters with more than fifty cultures." They mattered, "their ancient lives still speak to us today."

The Vikings, like their bloody vision of the creation of the universe, have "an unsettling story, full of strangeness, violence, and contradictions." Modern media "looking in on the Vikings" wrongly make them appear familiar and "ignore how they themselves saw the world."

Neil Price writes an anything but romantic history in Children of Ash and Elm. The narrative is entertaining reading, a fully documented history of the Vikings. He explores "Viking exceptionalism" but in his telling, he admits "it is important not to lose sight of the absences."

"The Vikings never wrote their own histories" and their writings are "limited." They did not like books "probably because it gave them nothing they wanted."

These Scandinavians had an oral society, and what survives comes from later prejudiced Christian writings. Modern perception of these peoples "have suffered from stereotyping" even in "how their gods and other supernatural brings have been perceived."

This book draws its title from how the brother gods Oden, Vé, and Vili made the first humans from driftwood, the first man Asker "the ash tree" and the first woman Embla "the elm." Price explains that "nine worlds that made up the Norse cosmos," all connected by the great ash tree Yggdrasill.

In part one of Children of Ash and Elm, Price tells of their world in Midgard, in our world the Middle Earth. To the Vikings, it was divided geographically between Denmark, Norway, and Sweden, "each of them [sub-divided] into numerous polities" and islands "that supported their own distinctive cultures."

All was "masking something very different, very old, and very odd," much of which cannot now be understood. The description by ibn Fadlān of the funeral of a prominent Viking makes for disturbing reading about bizarre rituals around alcohol, food, killing, and sex.

"The distinction between belief and knowledge is significant for the Vikings." They lived "with the invisible population with whom they shared their world": elves, giants, gods, ogres, trolls, Valkyries, and werewolves, often requiring "placating, even a form of spiritual bribery." These early Scandinavians had at least 40 terms for sorcerers.

The second part of this work discusses how the "Scandinavians hired out as mercenary auxiliaries" during the last centuries of the Rome. This culture grew from a worldwide "nuclear winter"-style event that "took well over a century for population levels to recover." Plague and war made the situation worse. All of it influenced the Viking view of the universe.

The society that emerged was largely family and farm oriented; it was "deeply stratified, with an individual's place in the stack largely dependent on the resources available to him or her." Government and the legal system "we're not strictly democratic but were nonetheless focused on formal ideas of fair representation."

Vikings prospered in the slave trade and had some polygamy. Men and women, or at least husband and women, however, had a form of equality including with regard to divorce and dowry. Price, ever the archaeologist, thoroughly discusses clothing, food, ice skates, number nine, runes, sheep, ships, silver, sorceresses, and much more of daily Viking life.

In the final chapters, the author writes sagas (Viking stories) beyond the history of the archaeology of early Scandinavia. He does so in as clear a scholarly matter as the sources will allow. The early "maritime violence" grew from ca. 750 CE to "the rise of the true Viking armies with overwhelming campaigns after" 834 CE, "in fleets numbering hundreds of ships, carrying thousands of men."

The maps in Children of Ash and Elm show the vast scale of this unique Empire. Viking ships crossed the North Atlantic and sailed the rivers of Russia to Baghdad and beyond. They would receive ransom for Paris and winter in London.

Eventually "seasonal campaigns evolved into a continual Viking presence" in the British Isles and France. The Greenland "settlers clung to their farms into the 1300s" (almost 400 years).

"As ever, it was not nearly so simple." It "was never a process, something with a firm direction."

The "slaughter-wolves" had sophisticated "traditions, practices, and world views built over millennia" that are not understood. "The core of it all was an export of the trends and behaviors" that had existed in Scandinavia for centuries, networks of trade and warfare.

"The Viking raids were violent, brutal, and tragic" and for a "combination of individual motives and the sociopolitical aims of local elites." Price labels these attacks as "deeply political" and "the manifestation of economic policy"; leaders, including financial backers who stayed home, bought influence and status with plunder.

These ventures were "very profitable indeed, albeit with inherent risks." Successful raiders "may have improved their social standing, personal wealth, long-term economic outlook, and perhaps their marriage prospects."

Defenses were countered by larger and more widespread raids as well as Viking fortified camps. Scandinavian societies mutated into new peoples, even in their homelands. "These [raids] were not entirely one-sided affairs." The raids ended "as the Scandinavians moved into their many different futures" in the greater Europe.

Children of Ash and Elm is a thorough, readable, one-volume history of the evolving Viking culture built on the documentary and on archaeology. It serves as a model for how modern science can add to historical scholarship and storytelling. The research is thoroughly documented and the book well-illustrated, chiefly in color.