A Childhood: The Biography of a Place 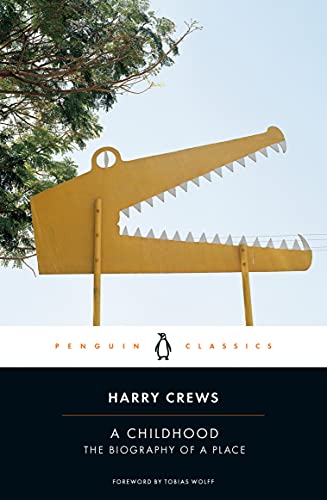 “The power of the written word will never be made more clear.”

In the front matter of the new Penguin Classics Edition of A Childhood, the writings of Harry Crews are placed within the genre of Grit Lit or Dirty South. This seems accurate. Although Crews is often described as the successor to the Gothic Southern Literature of William Faulkner and Flannery O’Connor, Crews pushes the genre further, taking his writing to a new level of violence and surrealism. Crews has produced 18 novels and a vast output of essays and short stories. Very little of his work misses the mark.

Crew’s novels, from The Gospel Singer to A Feast of Snakes; Car to Body; The Knockout Artist to The Mulching of America, to name just a few, offer a parade of strange, odd, grotesque, and bizarre characters with deformed personalities who are unforgettable and, in their own way, lovable. Often his central subjects are the South, southerners, the land, and the struggles of extraordinary ordinary people. He moves through the modern south with a satirical scalpel.

Of all of Crews’ magnificent output, it is A Childhood: The Biography of a Place, first published in 1978 that is the most memorable and is written in a language that will sear the mind and memory. The “Place” of the subtitle is a sharecropping farm outside of Alma, Georgia, near the Okefenokee Swamp during the Great Depression. The Childhood is that of Harry Crews.

Crews moves from his earliest recollections of life through to his departure for the Marines, with another stop back in Georgia on his return from the service. He begins with these words that grab your attention: “My first memory is of a time ten years before I was born, and the memory takes place where I have never been and involves my daddy whom I never knew.” In the conclusion of this first section, of the first chapter, Crews says that he does not know if what he has written is true, and that, in fact, he no longer cares. He built this section from the stories that he heard about his father from a variety of sources.

The biography is told from the viewpoint of a child, then an adolescent and, finally, by a young adult. It offers a harrowing view of the trials and tribulations of sharecropping in the South during the Depression. The struggles are many, and Crews describes many of them in considerable detail. It is a time and a place that is gone, accessible only in literature and histories.

Farming a difficult land behind a mule with a plow becomes palpable in the telling. What is demanded by the land and the mule is a strong body and a stronger will. Setbacks are common, and it’s nearly guaranteed that just when it appears the grinding poverty is about to be defeated, mishaps will rise up to crush dreams once again.

There are startlingly wild scenes written with hair raising power. The two most vivid involve the young Crews. In the first, the boy accidentally falls into a huge pot of boiling water that is being used to clean a hog. What transpires is told in graphic detail. In the second, when Crews was a toddler, he is with his mother until she sees two calves heading toward a barrel of pesticide. She runs to stop them. The toddler seizes the moment to taste the lye that is being used to scrub the floor. Crews doesn’t spare the reader his vivid memory of these two horrible disasters.

One of the longer sections of the book deals with Crews’ struggle with the paralysis of his legs. It is a long struggle with harrowing developments including a faith-healer’s attempt to cure him. Given the paralysis, Crews’ world is now restricted, first to his bed and later to the porch, where he sits and watches summer turn to winter and then spring. He becomes the object of curiosity for neighbors and relatives who come to look at him and his twisted legs. They stare and say nothing.

Crews describes the Jewish peddler who came periodically to offer his wares to Crews’ mother. Crews, his brother, and childhood friend, Willalee, stood by the side of the road adjacent to the mules and wagon in wonder of this man who looked and sounded so foreign to them. “The Jew,” as he was known, was a fixture in the life of the rural confines of the old South. He dealt only with the woman of the house and the transactions were set in a semi-formal ritual of bargaining, in both kind and in cash.

Crew’s word picture capturing this typical scene in Southern life, with its minute collection of images and attitudes, is an example of Southern literature at its best. It is a moving and remarkable artifact of a time and place that has receded into the past. As the peddler’s wagon pulls away, the boys felt “as though we had ourselves just been on a long trip to the world we knew was out there but had never seen.” This is precisely the feeling conveyed in this remarkable passage, and indeed from this biography of a place.

Beyond these moments and incidents, Crews’ world is peopled by aunts and uncles; his often violent stepfather; his mother of remarkable strength of body and will; his brother; his dog and constant companion, Sam; and his close friend Willalee Bookatee, an African American of his age with whom he shares this childhood; and Willalee’s family. In addition to the farm, Crews will spend part of his childhood in Jacksonville, where his mother seeks refuge from his stepfather. The contrast between city life and rural life is well-drawn, as is the one constant, the struggle to survive.

This review cannot begin to capture the power of the writing of Harry Crews nor the essence of this portrait of the life of a sharecropping family in the Great Depression. All that can be said is, read it. The power of the written word will never be made more clear.