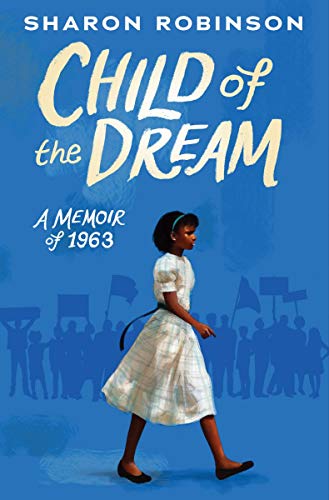 Sharon Robinson, the daughter of baseball star Jackie Robinson, has written a timely memoir in Child of the Dream, describing the pivotal events of 1963, the year she turned 13. Most people know that Jackie Robinson broke the color barrier when he started playing for the Brooklyn Dodgers in 1947. Fewer probably know of his role in the Civil Rights Movement, beautifully detailed in this loving portrait.

Robinson gives a sense of her father as both role model and spokesperson, someone who can navigate between the white and black worlds. At his New York office at Chock Full o' Nuts, where he worked after retiring from baseball, the black workers “shared precious memories about seeing my dad play baseball. . . 'Once my father and I took the train all the way to Pittsburgh just to see Jackie play. You know that no one since Babe Ruth brought more fans into ballparks.'”

As the Civil Rights protests heat up that year, Jackie inspires people in a different way and provides a bridge between the races that is more important than ever. Robinson describes learning about the Children's March in Birmingham, both inspired by the bravery of so many young people and horrified by the government's reaction of jailing children. “Could this really be happening right here in America?” she wonders, a feeling that will resonate with today's readers, reeling from the news of current social injustices.

Growing up in a white suburb of Connecticut, Robinson finds that the protests and violent reactions bring racism home for her. She grapples with understanding the divisions in America and sees her father in a new light as his role in the movement becomes clear. Near the end of the book, the entire family joins Martin Luther King, Jr. in the March on Washington, along the Mall to the Lincoln Memorial, a pivotal place for such a strong statement of protest. It's a powerful moment as Robinson sees blacks and whites, young and old, all marching together for equality and justice.

The book includes lovely candid photographs from the family album, making this era more vivid and placing her father among the pantheon of Civil Rights heroes, where he belongs.