The Chief: The Life and Turbulent Times of Chief Justice John Roberts 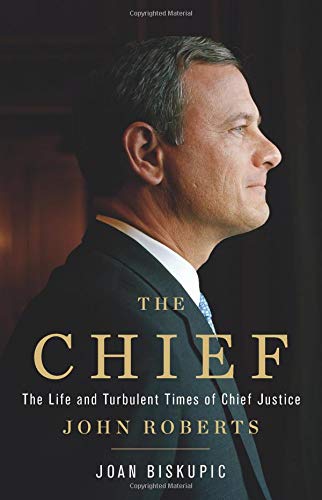 “Although one might think a conservative future will naturally follow from a conservative past, a truism previously betrayed by the likes of Chief Justice Earl Warren, the legacy of the Roberts Court in the Trump era is still a blank slate.”

Article 6 of the United States Constitution self-proclaims that it is the “supreme Law of the Land.” In the landmark 1803 case of Marbury v. Madison, the U.S. Supreme Court declared that the federal judiciary, which resided at the top of the food chain, was the supreme arbiter of the supreme law. And Supreme Court Justice Robert H. Jackson explained, in a concurring opinion in the 1953 case of Brown v. Allen, “We are not final because we are infallible, but we are infallible only because we are final.”

It is against that backdrop that author Joan Biskupic presents her insightful biography of the current Chief Justice, The Chief: The Life and Turbulent Times of Chief Justice John Roberts.

Roberts was nominated to the Supreme Court by President George W. Bush to succeed Justice Sandra Day O’Connor, even though he had served only two years on the D.C. Circuit Court of Appeals. But with the death of Chief Justice William Rehnquist, for whom Roberts clerked after graduating from Harvard Law School, Bush shifted Roberts’s nomination to the chief justice spot while Samuel Alito succeeded O’Connor. And with that, the “Roberts Court” was born.

In her prologue, Biskupic writes, “To appreciate the influence of a chief justice, one need only understand that while there have been forty-five presidents of the United States [although the actual number of people who served is 44, since Grover Cleveland served non-consecutive terms as the 22nd and 24th], there have been only seventeen chief justices.” So how did John Roberts rise from the suburbs of Chicago to serve as only the 17th chief justice on the court that is infallible because it is final?

The author skillfully traces Roberts’s rise from childhood almost as if he were a man of destiny, yet with human insecurities with which we can all identify. For example, his law school roommate said that Roberts was a “great consumer of Pepto Bismol” to calm his nerves.

Although Roberts argued nearly 40 cases before the Supreme Court, gripping the lectern to stabilize his shaking hands, he always wrote out the opening words “Mr. Chief Justice and may it please the Court” lest he freeze. Additionally, “For good luck, he would tap a foot of the large bronze John Marshall [the first Chief Justice] statue on the ground floor of the building.”

According to the author, Roberts’ conservatism was sown during his youth, incubated during his school years, nurtured while clerking for Rehnquist and later working for the Reagan and George H.W. Bush administrations, and finally blossomed on the Supreme Court.

In addition to championing conservativism, she writes that Roberts cares deeply “about public regard for the Court as an institution,” and he believes that “the justices should work toward greater consensus, because more unanimity would foster a more stable impression.” Good luck with that in today’s divisive political atmosphere dominated by 5-4 Supreme Court decisions.

For Supreme Court and Constitution junkies, The Chief offers a case-by-case review, by subject matter, of Roberts Court decisions, with an emphasis on race. According to the author, one of Roberts’s central philosophies is the notion that “remedies tied to an individual’s race were as repellent as racial discrimination in the first instance.”

A particularly interesting chapter describes Roberts’s change of heart in the case of National Federation for Independent Business v. Sebelius that, to the consternation of many political conservatives, saved the Affordable Care Act, sometimes known as Obamacare. Biskupic suggests that his swing vote in a 5-4 decision, which seemed at odds with his conservative philosophy, may have been motivated from a broader political vantage point. “Viewed only through a judicial lens,” she writes, “his moves were not consistent and his legal arguments were not entirely coherent. But he brought people and their different interests together. He acted, in short, more like a politician.”

Other subjects include campaign finance laws and their place in First Amendment free speech protections, the Voting Rights Act, affirmative action in university admissions, and gay marriage cases such as United States v. Windsor and Obergefell v. Hodges. The retirement of Anthony Kennedy and his replacement by Brett Kavanaugh suggest a still-fractured court that will continue to crank out 5-4 decisions in these and other areas, but it raises the question of whether John Roberts will fill the swing vote seat left vacant by Kennedy.

Biskupic concludes that, while Roberts, at the age of 64, is still early in his tenure, “the chief justice is leading a Court increasingly in his own image. He is positioned at the center in every way, and the law will likely be what he says it is.” Although one might think a conservative future will naturally follow from a conservative past, a truism previously betrayed by the likes of Chief Justice Earl Warren, the legacy of the Roberts Court in the Trump era is still a blank slate.