Chicken Soup for the Soul: All in the Family: 101 Incredible Stories about Our Funny, Quirky, Lovable & "Dysfunctional" Families 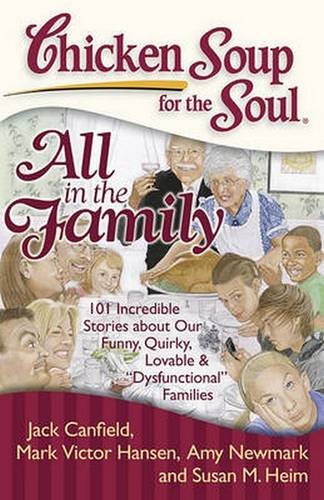 Story vignettes are like hors d’oeuvres. They pique your interest, but they’re not very filling. The anecdotes found in Chicken Soup for the Soul: All in the Family are palatable because they are taken from real-life families, but due to their brevity they fail to leave a lasting impression. Editor Susan M. Heim does an admirable job sifting through thousands of submissions to arrive at the 101 included entries, but the limitations of the Chicken Soup framework produce superficial, glossy tidbits instead of deeply resonating personal accounts.

The stories, while divided into sections such as vacations, holidays, and in-laws tend to blend together due to a lack of significant detail. The tales are quickly forgotten since many are based on worn-out clichés: the insufferable mother-in-law, the inept father, the doting grandmother. While some delve into serious issues like abandonment, alcoholism, and mental illness, most unwittingly reach a tidy conclusion within two to three pages. These easily portrayed resolutions are likely to create a disconnect for the majority of the book’s audience.

Yet there are a few that rise to the occasion of providing substance in a condensed format. In Right from Wrong author Michael T. Smith states: “I learned a lot from my dad. I learned how not to treat my wife. I learned to give my children love and attention. Dad didn’t teach by example. He taught by making me aware of what is wrong.” A mental burden is revealed in Marijoyce Porcelli’s Grandma’s Beads: “Somehow [Grandma] let go of that frigid, bitter persona that was her usual self and talked, really talked. Unfortunately, these pleasant lulls didn’t last long.” The struggle to reconnect with an estranged son is depicted in Marsha D. Teeling’s A Tiny Piece of Paper: “Why does [my son] hate me? I see him with his children, and I know that at least he is breaking the cycle because he is a loving, caring father.”

Some humorous moments deserve a mention. April Knight’s family arrives in the Ozarks only to attend the wrong reunion in Who Are All These Strange People?  Melanie Adams Hardy learns a whole new vocabulary while riding in Grandma Lillie’s Red Cadillac. Mimi Greenwood Knight deals with a husband whose mouth lacks an off switch in What Did You Say? While all the mischievous Ben Kennedy has to say is the key phrase: That Did It! to cause his little brother to take off running and screaming.

Overall, this is a book for a location where reading options are limited such as a doctor’s waiting room or an airport gift shop. It’s a good time killer when there’s nothing better to read.