Checkpoint Charlie: The Cold War, The Berlin Wall, and the Most Dangerous Place on Earth 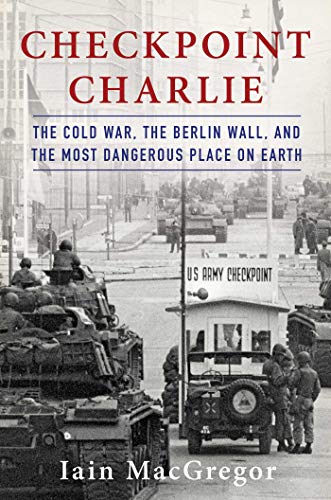 “MacGregor . . . does not write a spy novel, but an engrossing read built on solid documentation and witnesses to when Berlin became the center of a Cold War on the verge of a nuclear holocaust.”

Espionage has a geography and it includes places like Area 51, Bletchley Park, the Orient Express etc. Checkpoint Charlie made that list by October 1961 when the Communist “East German and the Soviets had successfully split the city [of Berlin] in two with what would become the Berlin Wall." Iain MacGregor tells its story in Checkpoint Charlie.

“The narrative is not a grand sweep of historical analysis,” although the subject could merit such a treatment, “rather it tells many stories of the Berlin Wall, from a variety of perspectives and voices.” Checkpoint Charlie does not include individual narratives but rather the story told in chronological order by the people who lived it.

From these memories, the author tells much about Cold War Germany such as currency issue, the Berlin airlift, relations between Kennedy and Khrushchev, the deaths of persons trying to escape to Allied occupied Berlin, the speeches by American presidents, spies, and prisoner exchanges. Thousands of individuals served at or remember Checkpoint Charlie and the Berlin Wall.

“There was a sizable portion of the [East German] country’s population who felt comfortable under the Soviet occupation” but, "as the Communist economy failed” by early 1952, East Germany had a “continued and rapidly increasing exodus of professionals and skilled workers.” The Communist Russian government forced the closure of the border creating the “iron curtain” across Eastern Europe. It also held the “Poles, Czechs, Hungarians, and Romanians.”

Just from the German Democratic Republic, “more than 2.1 million people in ten years, a sixth of the entire population . . . simply walked out their front doors and never returned.” The Berlin Wall went up to keep these people “generally under age twenty-five: the nation’s future” from escaping to the American occupied areas of the city.

Closing Berlin (Operation Rose) proved dramatic, immediate, and thorough. Eduard Schram and other members of the East German border patrol received orders “not to allow travel from east to west, not to react to Western provocation, and not to open fire with live ammunition.“ “Eighty one crossings were reduced to thirteen.” Public transportation ended at the border and the East German government closed all 193 streets in and out of the city.

“The shock of events on that first night quickly turned to anger and heartache.” Several witnesses contributed their memories of the chaos, fear, and riots that broke out when the wall went up “that now stood six feet high, topped with barbed wire, and it zig zagged for twenty-seven miles through the city”: “haphazard in design and crude in construction.” Ironically, materials came from the ruins of the city left over from World War II.

“The only physical resistance East German was from West Berliners, who fiercely demonstrated their anger and disgust.” “Alarms were continually raised due to the sporadic news coming in from all parts of the city.” Families suddenly found themselves separated with no means of contact. Rosemarie Platz and others escaped.

Checkpoint Charlie does not appear until chapter five. It “would be formally distinguished by the Four Powers [controlling Berlin] as the single crossing point (either by foot or by motor vehicle) for foreigners or members of the Allied forces.” “The Allies purposely . . . made do with what is now the iconic wood shed,” but the East German Communist government eventually erected “a multilane shed where cars and buses with their occupants checked” as the wall went through four generations over the twenty-eight years that followed. MacGregor describes it and the changes in the Berlin Wall in detail.

Each side “wondered which side would blink first.” They matched each other tank for tank, as the confrontation accelerated “with the world’s press anxiously waiting by the phone or on radio mics.” Mercifully, Kennedy and Khrushchev “did not want a war over Berlin,” a “potential Armageddon.”

MacGregor, in Checkpoint Charlie, does not write a spy novel, but an engrossing read built on solid documentation and witnesses to when Berlin became the center of a Cold War on the verge of a nuclear holocaust. It would make a great gift for anyone who lived in and served in that place and time.

The book has annotation, a bibliography, and some photographs but only one map and it is only of Cold War Germany.