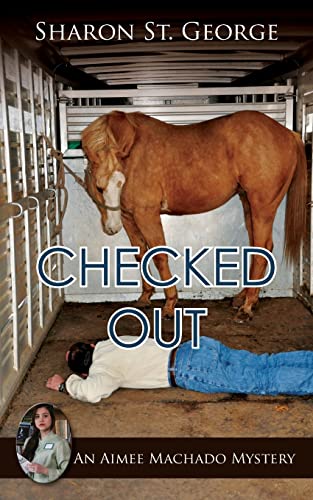 Number two in a series is always a challenge for an author, especially after a successful launch. Sharon St. George shows that she can keep up the momentum established in Due for Discard with her enterprising amateur sleuth, Aimee Machado.

Checked Out plops readers right into the story problem and key characters, and sweeps them along with surprises and cleverness until all is tidied up at the end. It takes a long time to get there though. The mystery plot has so many side twists and false leads that it almost defies resolution. About the time you think the case is solved, more layers get unpeeled, and Aimee goes off on yet another avenue of investigation fraught with danger.

But she’s a gal qualified for the job. A health sciences librarian at the Timbergate Medical Center in northern California, she specializes in forensics and has a keen nose for something “off”—along with a bulldog’s resolve to find it. In this case she is alerted by her colleague and best friend, Cleo, to problems surrounding a urologist connected to too many deaths that turn out to be murders; however, evidence shows them to be accidental if nobody digs too deeply.

Amy does that digging, prompted by Cleo and aided by her on again/off again boyfriend, Nick the pilot. He describes her as “a five-foot-four-inch little girl on the outside, but on the inside, I swear you’re an 800-pound gorilla.”

This suits a heroine who sometimes seems over-endowed with traits and talents. A unique mix of Chinese and Portuguese lineage, she’s exotic-looking and smart, has a black belt in jujitsu along with other athletic abilities like running and hiking; she also has the practical skills to manage her grandparents’ llama ranch when they’re absent and help them with chores when they’re around, along with the sharp administrative and PR skills required for her job, plus she can handle a gun.

Most important, though, and in common with all cozy-mystery heroines, Aimee has a powerful curiosity. “The more I learned about Dr. Poole, the more I wanted to know,” she says; and if you substitute any word for “Dr. Poole,” you get the born investigator that Aimee is.

You can also substitute “nosy parker” for “investigator,” because that’s what Aimee is, too. The crimes she investigates really aren’t any of her business, and her justification for pursuing them probably wouldn’t cut it in the real world. She undermines her own moral high ground by not keeping her word to others. “I had promised not to play detective again,” she says of a conversation with Nick, but playing detective is what she does for the whole story.

Of course, without that personality attribute, there would be no story. So for readers willing to suspend disbelief and enter into the spirit of the thing, the story is interesting, unique, and fun, and the puzzle is challenging to solve ahead of the heroine. Author St. George is at work on the third volume of the series, which will keep fans happy. If she backs it down a bit, making the story more credible, then her fan base will swell because the other elements keep this character and her adventures engaging.