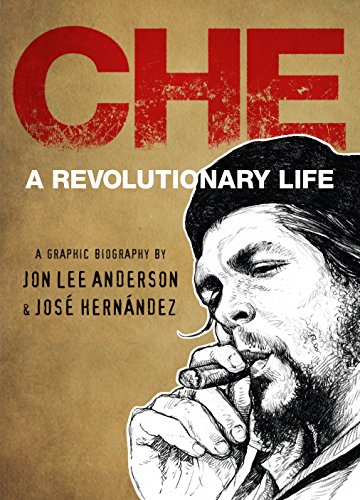 Che: A Revolutionary Life (2018) is the graphic form of the book with a similar title also written by Jon Lee Anderson, published in 1997. The graphic Che is an ambitious project, spanning 421 pages. Its length is just over half of the original biography, which weighed in at 814 pages. The purpose of graphic Che is as much a mystery as the man initially born Ernesto Guevara de la Senna. That man took the moniker Che as part of his effort for myth self-creation. He side-stepped his education as a doctor and embarked upon a mission to destroy capitalism and create the New Man.

His grand mission justified the deaths of many, including the innocent. Like Beria to Stalin, he became the trigger man to Fidel. Like Beria, he was purged and ultimately assigned death by execution. The story of Che is as old as that of Caesar and Robespierre. He was a psychopath. Anderson has already told his version of Che’s life once before. It needed no reprise.

Anderson’s written introduction to the graphic Che poses the question: “How do we explain Che to youngsters who . . . can’t imagine picking up a gun to fight for their ideals?” He must believe that the way forward to develop Che hero worship among youngsters is tedious bloody graphics coupled with obscenity laced dialogue.

Che accurately depicts Che’s rejection of peaceful means to achieve social change. Che is quoted as stating: “Solutions, political parties and democratic movements are treachery.” Only violence to the extent of his hoped for nuclear war between Russia and the US would so destroy the old order and allow the proper molding of the New Man from its ashes and dust.

Anderson posits that the book should promote “reflection” on the character of Che, “to reevaluate [him] through the prism of each new generation.” Such reflection would be a wasteful travesty. Che in fact lined up men, women, and children before his firing squads. He placed them before the barrel of his own gun and pulled the trigger. He did this without trial, with the simple declaration that they were enemies of the state. He hated free speech, a free press and for good measure, he hated homosexuals. A quote attributed to Che was: “In fact, if Christ himself stood in my way, I . . . would squish him like a worm.” Reflection be damned for a man like that.

The graphic artist for Che is Jose Hernandez. He is described on the book jacket as a political cartoonist for the Mexico City newspaper La Jornada. What little exists in English on the Internet about that paper pronounces it “leftist.” Apparently following his political instincts, Hernandez crafts the visuals of Che, Fidel, and other faces of the revolution as resolutely as the ubiquitous Che T-shirt image. They all appear to have stepped directly from Soviet war propaganda posters. Conversely, enemies of the state appear fat and flaccid. Special artistic treatment is reserved for then Vice President Richard Nixon. His voice bubble seems about to shout: “I am not a crook!” So much for even-handed reflection.

The pace of Che staggers along. For example, the execution scene of one traitor to the cause crawls almost wordlessly through penned mud and rain for eight pages before the justified bullet is fired. The supposed factual biography of Che slips into fantasy from the start. The first 13 pages of the book depict Ernesto (He has yet to elevate himself to the exalted status of Che.) battling infection and fever. The fever seems to transport Ernesto into the future to meet his Che self. Che exhorts Ernesto to become Che. He urges Ernesto/Che to die “in a perfect demonstration of hate and combat.” So much for the Hippocratic Oath to come.

At book’s end, Che indeed dies with a steadfast look of hate and combat on his face as inked by Hernandez. Unfortunately, it takes five pages of Che staring into the muzzle of his executioner’s gun before he simply fades to black without a dramatic gunpowder blast. The epilogue of the book gives the heroic myth of Che a solid congratulatory pat on the back. His spirit is praised as immutable, immortal and true to his goal of eternal revolution and class warfare. The sense of the book is that every parent should hope that the face of their sons glower boldly from wall murals across Cuba and the world. Viva el Asesino!