Chasing the Rose: An Adventure in the Venetian Countryside 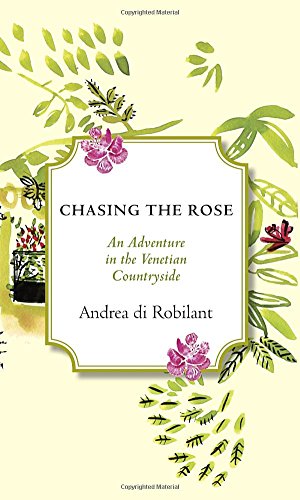 “Fear not—let your eyes glaze over through the Latin-studded rose begats—and glean the tantalizing and titillating bits of history behind them that you won’t find in any school books.”

Author di Robilant’s previous book based in this region A Venetian Affair, which is a biography of his grandmother Lucia Mocenigo, set the stage for this rose-garden history and search for a long lost Chinese rose. Or was it lost?

First seen by di Robilant in the abandoned garden of his ancient ancestor’s estate, and only warranting a brief mention in her biography,  the existence of a very fragrant unnamed pink rose sparked an interest throughout the hierarchy of modern European rose lovers that propelled the author through years and many miles of adventures in a quest to identify it.

Through diligent detective work, serendipitous events, and just plain good luck he—spoiler alert!–resolves the issue to his satisfaction. Just what satisfies him and how the nature of his quest changed on the journey makes Chasing the Rose an engaging read.

Along the way, di Robilant meets the real tillers of the earth, the gardeners whose fascination with old roses is seen in their gardens and the hundreds of ancient varieties they collect and propagate. It is through their eyes (and noses) that he learns the history of the forbearers of all modern roses, the four China studs, and the pedigrees of hundreds of varieties of roses descended from them.

His search for the name of the fragrant pink rose (working name: Rosa Moceniga, named after the family estate) actively began when he found Lucia’s gardening journal which she kept during the rosomanie (rose mania) period in Paris, France.

From Lucia’s journal di Robilant gleaned this clue: “In the entry for July 23, 1814, Lucia reported visiting Noisette’s nursery on rue Saint-Jacques in the company of Joseph Martin, an expert gardener and adventurous rose chaser who worked under Andre Thouin at the Jardin des Plentes. Martin was a veteran of botanical expeditions to Madagascar, South Africa, the West Indies, and Latin America. In 1804 a British privateer captured his returning ship; he was imprisoned, and his valuable herbarium sold at auction. Martin was eventually repatriated and was now back on the job, helping out Lucia. Noisette showed them a cultivar they called ‘Rose Bichonne.’ As they took turns smelling this exotic specimen that had recently arrived from China, a discussion developed about its fragrance. Lucia thought it definitely smelled of peaches, but Monsieur Martin and Monsieur Noisette had different opinions: one of them (she does not say which) argued in favor of pineapple, while the other insisted it smelled of raspberry gelée.

When I first came across this amusing sniffing contest in Lucia’s diary, it occurred to me that a combination of peach, pineapple, and raspberry gelée described very well the scent of Rosa Moceniga–at least according to my nose.”

Following that clue down through history brought di Robilant to modern day rose expert Francois Joyaux and the woman with a most magnificent rose garden, Eleonora Garlant. It was she and her husband Valentino who opened the world of old roses to him, and it was she who encouraged him on his journey. Her credibility in the rose community unlocked doors the author could not possibly have known existed.

And her carefully detailed history of the roses and the significance behind their names are what make this book a history of old roses (and the people they are named after) as much as a quest to find the name of one fragrant pink rose associated with the Mocenigo estate.

That being said, if you are not interested in the minutiae of European history (both from a world and from a garden perspective) or you don’t share the author’s fascination with old roses, you might wonder why you should read this book. Similarly, if you read his biography of Lucia, A Venetian Affair, you might recognize bits of her life repeated here and begin to wonder how much this book could stand up without the first. Fear not—let your eyes glaze over through the Latin-studded rose begats—and glean the tantalizing and titillating bits of history behind them that you won’t find in any school books.

Then consider this a sequel to di Robilant’s A Venetian Affair and dive back into his delightful prose about a subject—old roses—that you may just find yourself falling in love with.

Richard Frisbie is a travel, cooking, and gardening writer whose work has appeared in a broad range of print and online venues, including EDGE Publications, InsideOut magazine, Examiner.com, and others. He is also owner of Hope Farm Press, editing and publishing regional books on New York State.