Chasing Goldman Sachs: How the Masters of the Universe Melted Wall Street Down . . . And Why They'll Take Us to the Brink Again 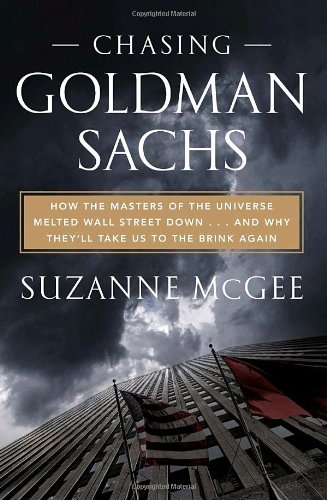 It already seems as if there have been 722 of them, roughly, with plenty more to come. Had such authorial enterprise occurred at The Great Depression’s outset, the production of wood pulp, ink, and binding alone would have probably employed enough people to pull the nation out of its fiscal abyss.

Most of these books display the 20/20 hindsight we have come to expect from the mass media when disaster occurs. Regardless, one can picture agents frantically calling their journalist clients, screaming into the telephone receiver, “You’ve got to get in on this boom! There will never be another one like it!”

Suzanne McGee, a contributing editor to Barron’s, has heeded the call. Despite its title, Chasing Goldman Sachs concerns itself little with the firm everyone now loves to hate. Goldman has already been tarred and feathered on national television by our noble senators, but it will take a lot more than that to ride it out of town on a rail. (Patience, please: There are probably twenty or so journalists and former employees working on their Let’s Hate Goldman books . . . the schadenfreude festival will begin shortly.)

Nor does McGee go for the blow-by-blow, how-the-bailout-happened narrative that Andrew Ross Sorkin employed in Too Big to Fail—a method that eventually left this reviewer more bleary-eyed than being forced to proofread a collateralized debt obligation prospectus.

Instead, McGee gives us a primer on Wall Street, eminently useful for any civilian who wants to learn the basics of the markets. We find out in anecdote after anecdote what led Wall Street to give up its function as trusted money utility—really a grid for ensuring financial liquidity—and become a profit-driven hydra. As McGee notes, over the past ten years it has become hard to figure out whether a Wall Street firm “was operating as an intermediary, helping clients finance transactions; as partners, investing alongside them; or as their rival, competing with them for trading ideas or access to deal flow.”

How did this happen? As with any disaster, one step led to another until system failure, and McGee identifies five: the end of fixed commissions; privately-held investment companies going public; the advent of computerized trading; the emergence of hedge funds; and the growth of proprietary trading by the Goldmans, Merrills, and other brokerages.

Yes, everyone wanted to be like Goldman Sachs. But, more to the point, few escaped the basic tenet of human nature: When you play with other people’s money, it’s easy to take risks—and the Houses of Morgan, Citigroup, Lehman, and others did just that while converting their cultures from that of caretaker to casino.

My problem with McGee and the countless other authors of Wall Street books are the pedestals from which they opine. They didn’t seem to be around during the 2005–2008 bubble of real estate, exotic debt instruments, and returns on equity of 15 to 20 percent by Wall Street. Only New York University’s Nouriel Roubini and a few hedge funders portrayed in Michael Lewis’s The Big Short saw disaster coming.

Such writers present us with the second draft of this recession’s history, but they lack the analytical chops for helping us avoid future disasters. The same goes for legislators and regulators: What can really tame animal spirits when you have Aunt Martha’s money on deposit? Glass-Steagall? Sarbannes-Oxley? The latest legislation coated with the sheen of lobbyist-laden contributions to campaign funds?

Think again. Every regulation touted to reduce risk only opens the field to new schemes —oh, sorry! Make that financial products—while the croupiers of Golconda work the loopholes and angles.