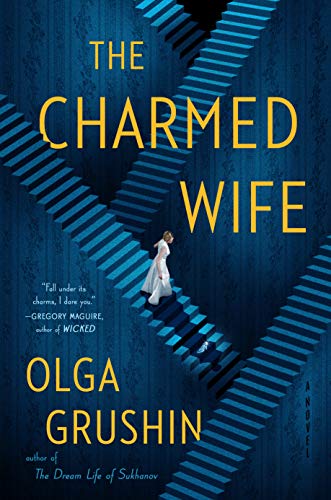 “Grushin’s facility with language . . . is a marvel. It’s the kind of prose that demands you submerge yourself.”

What comes after “Happily ever after?”

Olga Grushin is not the first writer to explore and explode one of the many fairy tales ingrained in our collective consciousness (see, for instance, Gregory Maguire’s Wicked or Neil Gaiman’s The Sleeper and the Spindle, or Gail Carson Levin’s Ella Enchanted). The characters and tropes of fairy tales resonate on a deep level; it’s no wonder that writers and readers keep coming back to them.

The blurb for Grushin’s latest, The Charmed Wife, tells us that, after 13 years, Cinderella is tired of being trapped in a bad marriage and pays a visit to a witch. Instead of asking for love potion to win back her Prince Charming, Cinderella wants him dead. In Grushin’s modernist fairy tale land, your local witch can function as both apothecary and hit man. That contemporary sensibility seeps through everything—the characters, the jokes (there are some), the plot twists, the language. It would be very easy for a lesser writer to make this solely a feminist retelling of a familiar tale or a Hallmark-ish “How Cinderella Got Her Groove Back” story of empowerment. While The Charmed Wife encompasses those tropes, it is not defined by being only one type of story. Timelines and chronologies and people and places seamlessly shift and morph and nothing is as it seems. That all of this works and ties together is due to Grushin’s facility with language, which is, in many ways, a marvel. It’s the kind of prose that demands you submerge yourself.

Take, for instance, this scene in which Cinderella is walking through the palace in the middle of the night: “Magic hung thick on the air, almost visible, like a sheen of green moonlight that made everything slightly distorted, shimmering and shifting—and she sensed this magic to be completely unlike any she had known before. For the ordinary brand of godmother magic was thinly spread, civilized as a powdered wig, harmless as a drop of liqueur after a four-course meal, whimsical as glass footwear, and entirely pedestrian in its dabbling, domestic purposes of comfort and matrimony. This magic felt uncanny—denser, older, much more hidden, and much less certain; though whether it was light or dark, she could not tell.”

That is gorgeous writing. It’s lyrical and descriptive yet also functions to advance plot. However, as with many writers, Grushin’s greatest strength may also be her greatest weakness. The lushness and occasional density of Grushin’s prose is like a super-rich triple-chocolate cake—you can only digest so much of it at once. Sometimes those lush descriptions are too much. Take, for example, a portion of this key scene that takes place in a wood:

“Sometimes it feels as if I am walking in place, on the bottom of a sonorous well, with the night sky a perfect black circle above me. Now and then I enter colder pockets of drifting mists and guess at vague shapes swirling through them—pallid lilies, grimacing faces, beckoning hands with thin, ghostly fingers—but the fog clears swiftly, and I find myself walking on the bottom of the dark starlit well once again. Once, I am enveloped in a cloud of floral scents sweeter than a powder room crowded with perfumed court ladies, yet with the lightest tinge of rot at the very heart of the smell. It seems to me that I am passing right next to a crumbling brick wall of some manor all entwined in blooming wild roses, yet I cannot be certain; and when I carefully put out one hand and feel about, I succeed only in pricking my finger on a thorn. Soon I start to feel drowsy, and drowsier still, until I am close to falling asleep on my feet. And perhaps I really do, for as I continue to stumble, to slumber, to stumble through the woods, I imagine a small log cabin striding past me on giant chicken legs, its one window fiercely ablaze, ruffled forest imps squawking and leaping out of its way by the dozen—and a sleek black cat on a golden chain who is singing a wordless song in a pleasant velvety baritone as it winds its way back and forth around an immensely thick oak tree in a blue woodland glad—and a glorious silver-haired maiden who is bathing in a silent forest pool, shining droplets of moonlit water running like pearls down her outstretched white wings—and other, stranger things that shimmer at the edges of my vision, beautiful and wild, yet melt into the dark whenever I turn to look at them directly.”

A reader can get lost in such prose. Conversely, such prose can also lose a reader. The best fiction takes us out of our lives and into someone else’s. There are moments when Grushin’s dense walls of swirling text are an impediment to connecting with her protagonist, making the book’s denouement a little less emotionally satisfying than it could have been.

The Charmed Wife is not the kind of book to read in the laundromat or while waiting at the dentist’s office. It’s best read late at night or maybe before bed, when the real and the imagined naturally (or unnaturally) meld together, where you can sink, undisturbed, into the language.