Charlie Martz and Other Stories: The Unpublished Stories 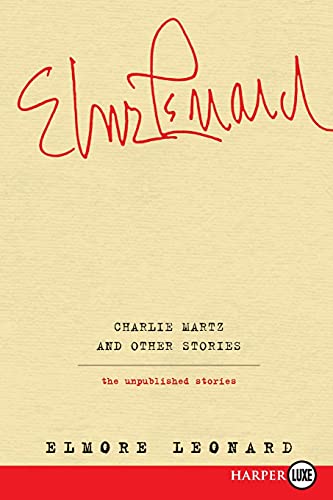 Charlie Martz and Other Stories: The Unpublished Stories is a collection of 15 short fiction stories (11 of which have never been published), written by Elmore Leonard at the beginning of his career in the 1950s.

The introduction to the book, written by Leonard’s son, Peter, lends a candid view of the author struggling to find balance in crafting his writing simultaneously with a career in advertising and in raising a family. It’s a shrewd lead-in to the book, framing these stories as Leonard’s “experiments” with style and with voice, in which Leonard breaks his very own Rules For Writing that he develops half a century later.

This book is honest and it’s raw, and we can picture Leonard so vividly working diligently away on tale after tale . . . but like all writers, much of what is crafted is not meant for publication. As his son notes, these unpublished stories are experiments or, perhaps more properly, “lessons” as Leonard teaches himself to write.

By its nature, this type of work lends itself to a sort of paradox in review: On the one hand, there’s a reason these stories are not published. Many of them are flat or trite, long-winded with little pay-off at the end and, frankly, disappointing. On the other hand, it’s a meaningful insight into the mind of a burgeoning writer who would one day become an international bestseller, hailed as the best crime writer in America by Newsweek, be a recipient of the National Book Award’s Medal for Distinguished Contribution, and be a literary inspiration for generations of authors and fans.

And it is an inspiration to peruse the earliest works of this man, to find them as average, sometimes less-so, but to know that from those origins he improved through hard work, study, and perseverance to write such novels as Get Shorty, Rum Punch, and Out of Sight.

Of course, to say that that Elmore Leonard’s early writings were only average is not to say there’s no passing enjoyment; many readers will find satisfaction on diverse levels. The first story, “One Horizontal,” is a classic set-up piece, which brought a chuckle. The Charlie Martz stories were a bit banal. I wanted so much to like “Short Stories for Men,” but the characters seemed forced boilerplate, even the matador himself unengaging. The best stories in the book are “Time of Terror,” a clever military piece set in Malaysia, with empathetic and charismatic characters found in the contrast between Ah Min and Barney Clad; and “Evenings Away from Home,” which probably represented most closely the sharp, tight patter Leonard would later become known for.

No master of a skill is born as such; musical composers, athletic stars, artists, and authors all must start from that same baseline of inexperience, and it’s fascinating and inspiring to be invited to have a peek into Leonard’s own baseline; however, for the casual reader who may wish to invest time in some of his more well-crafted (nay, brilliant), thrilling stories, some of the following may be more enthusiastically recommended: The Complete Western Stories of Elmore Leonard (2004), which includes his famous tale-made-twice-to-movie, Three-Ten to Yuma; Pronto (1993), which stars the US. Marshal, Raylan Givens, from which the television series Justified is based; Swag (1976); La Brava (1983); or what Elmore Leonard may be most popularly known for, Get Shorty (1990).