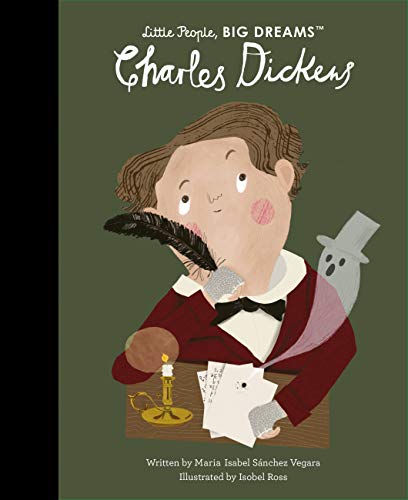 This book introduces a young child (ages 4–7) to Charles Dickens. It starts with his birth and childhood. Charles had to drop out of school at age 12 and work at a factory since his father was sent to prison because of his debts.

Charles became a junior clerk at a law firm, though no explanation is given as to how that happened. Charles was interested in the theater and the opera. He got sick and couldn’t audition. Then he tried writing. He got his work published serially, but the author doesn’t explain how. A newspaper? A publishing company? Did he meet someone who offered to look at his work? Did he know someone in publishing?

Dickens goes on to write two of his most famous works, Oliver Twist and A Christmas Carol. Dickens performed readings for charity.

There is a timeline at the end of the book called Facts and Photos.

The art is old-fashioned with black, green, blue, yellow, and red on a white background. The faces are flat, and arms and legs are stylized as straight and stiff. The end papers are red with white snowflakes.

The book is not unappealing, but it is so simple that it begs for at least one memorable tidbit about Dickens’ life. If a child goes to see A Christmas Carol performed, and then asks about who wrote it, this book fills the bill.

Anyone who likes a story of how someone with a hard scrabble life becomes a successful author, this is the story for them.