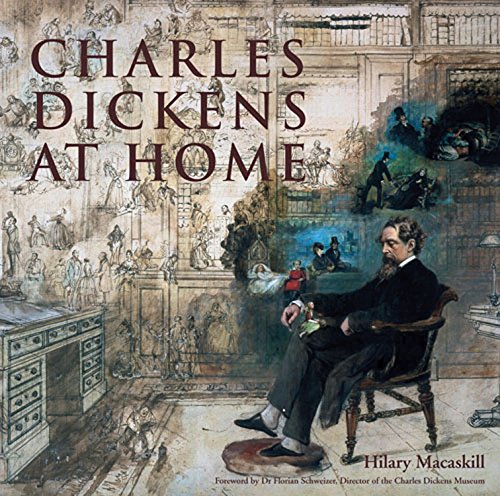 “In the tradition of this great weaver of tales, Ms. Macaskill’s eminently readable volume will delight book lovers everywhere as they are transported into the world of Charles Dickens at Home—the place that shaped his sensibilities and in which he created his classic novels.”

Next year marks the centenary of the birth of Charles Dickens, one of England’s best-loved authors. His novels such as David Copperfield, Great Expectations, and A Christmas Carol are loved the world over and have given us many memorable, beautifully drawn characters. They not only engage, but also enlighten us about certain aspects of what the world was like in Britain in the Age of Queen Victoria.

In his own world, Dickens was never happier than when he was at home, and “he cared passionately about home-making.” By focusing on this key aspect, Ms. Macaskill explores facets of Dickens’ life that will be of interest both to avid fans and to those seeking further insight into Victorian England.

Charles Dickens at Home takes the reader to the many and varied places where Dickens lived and visited. Our journey is enriched not only with insightful and painstakingly researched words, but also through a wealth of authentic illustrations and recent original photographs, contributed by Graham Slater. We are privileged to see where Scrooge and Mr. Micawber came to life, and gain a perspective on the “neatness and order” that Dickens needed in his surroundings in order to settle and write.

Although he is inextricably linked with the city of London, Dickens was born in the seaport of Portsmouth, and lived a great deal of his life in Kent. A predominantly rural county at that time, Kent spans from the south east of London down to the south coast.

But it is Victorian London that Dickens immortalized so memorably and where many of his novels are set, and despite acknowledging its shortfalls—“the streets are hideous to behold and the ugliness of London is quite astonishing”—the city always held a fascination for him and has often been described as the major character in several of his books. Even in the late 19th century, London was still a collection of villages rather than a big city—and Dickens relished exploring this diversity.

Revered not only as a writer, but also as a social reformer, Dickens was greatly affected by events from his own childhood and youth, not least when his father was jailed in the Marshalsea debtors’ prison in London.

His own early experiences of working in an oppressive manufacturing environment impressed upon him a need for the reform of workers’ conditions; however, this did not restrict his own personal indulgences at home, as George Eliot observed following a visit to his home at Tavistock House in London, commenting cuttingly on the “splendid library, of course, with soft carpet, couches etc, such as became a sympathizer with the suffering classes. How can we sufficiently pity the needy unless we know fully the blessings of the plenty?”

As the reader tiptoes through Dickens’ dwellings and holiday homes, into details of his marriage and his mistress, into the graveyards he found inspirational, and the fatal train crash that nearly claimed his life (and his honor,) we realize just how adeptly he created a sense of place and time in his books.

In the tradition of this great weaver of tales, Ms. Macaskill’s eminently readable volume will delight book lovers everywhere as they are transported into the world of Charles Dickens at Home—the place that shaped his sensibilities and in which he created his classic novels.