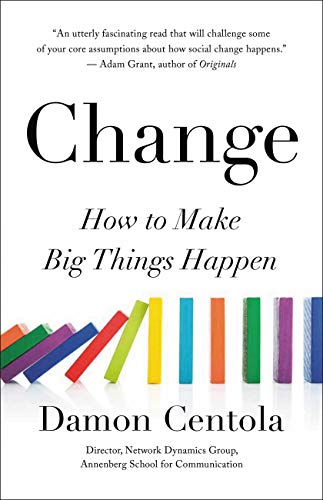 In this time of major social upheaval, Change is a welcome addition to the many books written about macro-level transformation. It explains how to predict cultural behavioral change and develop policies to activate and promote it. To be clear, this is not a book about making big things happen in your personal life but rather in the wider world—your workplace, our country and the planet.

The book is heavily researched and well written by a sociologist whose expertise is social networks. Among the numerous examples used to illustrate the points he is making in the book are the Human Genome Project, the Black Lives Matter movement, new farming practices in Malawi, Africa, and the growth of Broadway musicals.

The first third of the book dispels myths about how social change happens by debunking three popular theories based on the virus model that embraces concepts like influencers, contagion, and stickiness to explain how social change happens. Myth one involves the belief that influencers—stars, celebrities, national or international figures, and people renowned enough to be revered and copied—will spread new ideas through their status alone. The success of this theory is nullified by countervailing forces, the large swaths of a populace who give a “silent but remarkably strong social signal” that they are not interested or remain unswayed.

Myth two is about how contagion occurs: through spreading something new via weak ties (people who are acquaintances) and strong ties (those who are in your inner circle). “The Black Plague spread through strong ties—tightly knit social connections that linked people to their family, friends and neighborhoods,” but that was due to the virus being a simple contagion. For complex contagions, weaker ties work better because there is more redundancy, spreading “your idea to people who have never heard it before,” which provides a more expansive reach.

Myth three involves stickiness or making whatever you’re selling “easier to use, more striking, more discussion-worthy or more exciting, and less expensive.” Google’s innovation called Google Glass, a type of wearable technology, failed because, along with creating mass awareness, it also generated a normative or cultural backlash against it. Unfortunately for Google, most people failed to identify with the techies who bought and wore them. An example of successful stickiness is how early adopters of birth control spread their message from village to village in Korea and Kenya until the country was saturated with women using contraception.

The next section of the book describes how major change actually happens, starting with understanding the concepts of simple and complex contagions. The former involves “catchy ideas and memes that spread quickly to everyone but lack any lasting impact on what we think or how we live.” The latter is about the “much-deeper process of social spreading” or how we respond to innovation. Centola describes possible barriers to adoption of complex contagions due to resistance—difficulties with coordination, credibility, legitimacy, and excitement—but insists that “Each of these barriers to adoption can be overcome by social reinforcement.”

He goes on to explain how social media has grown through redundancy (hearing the same message from many sources), which is what makes memes or messages appear true or valuable. This happens through clusters of redundancy that include both narrow and wide bridges. A narrow bridge is, for example, a one-to-one connection, while a wide one involves groups of people. Which bridge you use is based on what kind of change you want to generate: “Narrow bridges speed information over weak ties. Wide bridges bear social change over strong ones.”

There is a chapter on the rules of relevance or making a message mega-appealing to others. Sometimes this involves the need for social proof, in which case early adopters are useful. Mobilization of large numbers of people is necessary for inspiring behavioral change through “excitement, or feelings of loyalty and solidarity.” And to create a sense of legitimacy, a diverse population or different kinds of sources are needed to get people on board.

The last section of the book is spent on exploring the tipping point, that point at which social change occurs and an idea or action supplants what was previously thought or done by the masses. “The reason that changing a social norm is difficult is the same reason that learning a new language is difficult: it requires breaking something that works” . . . “For social change to succeed, a revolutionary movement must ferry people across these uncertain waters to a new set of expectations and a new sense of competence.” Centola explains how to impact tipping points by challenging introspection illusion, mental blind spots and bias and adhering to the snowball strategy, which supports change agents as they go out into the world to spread the word.

The final section of Change focuses on building better work teams by using the premises described in this book. To Centola, “The hallmark of a well-designed team is that it preserves intellectual diversity while enabling coordination.” His seven rules for promulgating change are all about “propagating norms” rather than “spreading information” which may be a new idea for many readers pursuing social change. This view, in itself, may be new and unfamiliar and whether large number of readers see change differently after reading this book will depend on Centola’s persuasiveness and how well he got his message across.