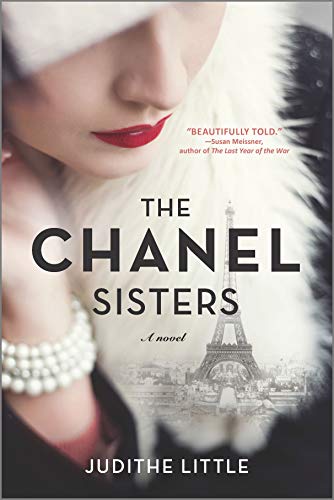 “The Chanel Sisters is a well-researched historical fiction that depicts France’s Belle Epoch and post-war change. But most importantly, is an exploration of class, ambition, and the sacrifices these women had to make in order to achieve success and love.”

The charity girls educated at the convent in Aubazine, France, are instructed in all useful things for becoming maids, seamstresses, or wives of farmers. But Chanel sisters, Julia-Berthe, Gabrielle, and Antoinette dream of something better. After their mother’s death, the sisters are abandoned by their father and left to be raised by the nuns. This theme of abandonment and the need to prove themselves worthy of love haunts them throughout their lives.

When their grandparents unexpectedly arrive at the convent with an invitation to visit them at their home, the girls are thrilled to discover an aunt, almost their age, who introduces them to the fun and excitement forbidden behind the convent walls.

Aunt Adrienne Chanel becomes their chaperone on visits to their grandparents. She shows them the sights of the town and becomes more like another sister.

While Adrienne, Gabrielle, and Antoinette crave excitement and fun, Julia-Berthe is content staying behind and helping her grandparents at the market.

It is Aunt Adrienne who introduces them to the idea of the haute, those with means who move through society by virtue of birth and wealth. To the Chanel sisters, the haute represent the something better they yearn for. But Gabrielle is quick to recognize the vulgarity behind the carefully manicured appearances of the upper crust of society.

At 19, Gabrielle, and Aunt Adrienne get work as seamstresses in Moulins, tailoring uniforms for officers of the Tenth Light Horse Regiment. It is grueling labor, but on the weekends these same officers buy them dinner and drinks and shower them with attention. But the girls don’t forget the youngest, Antoinette, still locked inside the convent. Each weekend she enjoys the luxuries of the world outside with Adrienne and Gabrielle. The three become known as the three graces of Moulins: beauty, mirth, and youth. It is because of these officers that Gabrielle begins singing in a local theatre, and it is there she earns the nickname of Coco.

But this is Antoinette’s story. While Coco flirts with Etienne, a wealthy man who eventually sets her up with a hat shop, Antoinette is intrigued by Lucho, an Argentinian polo player from whom Etienne is interested in purchasing horses.

Etienne has no intention of marrying Gabrielle, but instead sets her up as mistress at his country estate. Unhappy with the choice her sister has made, after leaving the convent Antoinette stays behind in Moulins. She makes friends with the local shop girls and is soon courted by the son of a grocer. When Antoinette realizes she can’t marry a grocer she quickly learns that the haute aren’t the only ones with prejudices. Shunned by her former friends because of the something better she desires, she leaves and joins Gabrielle.

She and Gabrielle (Coco) leave the estate and, with the help of Coco’s new lover, Arthur “Boy” Capel, open a new shop in Paris. Because of Coco’s daring, the Chanel brand becomes highly sought after and the sisters find success. Although Coco’s reputation has ruined her for society, Gabrielle finds marriage and respectability with a Canadian war hero.

But Antoinette soon learns the something better she seeks is not respectability, but love. And love is not in cold Canada with her husband, but in sunny Argentina with Lucho.

The Chanel Sisters is well done and believable. Though little is known of Antoinette Chanel’s life, Judithe Little gives her an authentic voice that makes you believe that everything you are reading is fact. Her characters are fully formed with believable dreams and obstacles and, as a reader, you are fully invested in their success.

While Judithe Little does a fine job presenting the reader with the romantic tale of the Chanel sisters, she is able to present something more. Throughout the book you are reminded of the rigid social construct of French society.

The Chanel Sisters is a well-researched historical fiction that depicts France’s Belle Epoch and post-war change. But most importantly, is an exploration of class, ambition, and the sacrifices these women had to make in order to achieve success and love.