Champion of Choice: The Life and Legacy of Women's Advocate Nafis Sadik 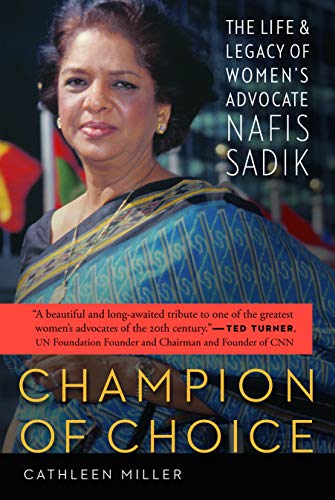 “Nafis Sadik is a woman who set out to ‘change the world’—and in many ways she did just that.”

Cathleen Miller’s Champion of Choice is a biography that pays tribute to the legacy of Nafis Sadik.

Champion of Choice: The Life and Legacy of Women’s Advocate Nafis Sadik is the story of a physician whose career began prematurely when, as a medical student, she delivered the baby of a refugee during the critical partitioning of India and Pakistan in 1947. It was the first of thousands of babies and mothers who benefitted from her skills and advocacy.

Even as a young girl, Nafis Sadik marched to a different drummer. When she was 13 she cajoled her chauffeur into teaching her to drive. She also eschewed the traditional role of a Pakistani woman of privilege and leisure whose future was arranged by her family.

Dr. Sadik is firm in her belief that she could not have achieved what she did in her lifetime without the support of her father and mother who had the courage to educate her. She chose medical school. It was not long into her career before she began to realize two critical issues: The first was the plight of women:

“I interned in obstetrics and that’s where I saw these very poor people with all kinds of complications. Many of them used to die of hemorrhage. And you started to see the connections between poverty, (and) lack of autonomy. . . You could see that many of these deaths could have been prevented . . . the common attitude was: ‘Pregnancy is a normal thing so what’s the big fuss about? . . . It’s part of a woman’s lot. When they get pregnant, some of them will die.’ ”

Later her husband, a military officer, “respected her ambitions.” And she chose to work as a physician on the military base. Nafis Sadik broke through the prevailing notion of “a woman’s lot” as she ignored raised eyebrows, drivingher own car to take care of women in far-flung locations.

The second critical issue was the relationship between population and poverty and a country’s ability–or inability—to invest in development.

Both of these issues served to guide her passion for advocacy throughout her career. At first, she worked with individual patients, hoping to make changes one life at a time. Soon the lure of working with larger systems and having a broader influence took priority. Ultimately, she competed for and won a position as administrator of Pakistan’s Family Planning Commission. Imagine: in a Muslim country, family planning is a totally foreign concept and women are considered second class citizens; how does one make progress?

As Dr. Sadik requested assistance and evaluation of her own programs, others came to her for the expertise she acquired. Pakistan’s program was a model for other countries, and Dr. Sadik became a leading international authority on family planning.

It is hard to imagine that in the late sixties and early seventies, the world was just waking up to the realities of overpopulation. Not even the World Health Organization included family planning in its own health agenda. The United Nations was just cobbling an operational plan for the United Nations Fund for Population Activities. (UNFPA). Ultimately, she joined the United Nations staff, where she remained for the rest of her career.

Despite ongoing battles as a woman in a man’s world, Dr. Sadik developed an aggressive and effective management style. She chose to decentralize authority and rotate office staff to field positions. Community building was her signature attribute, as evidenced by the successful international conferences in Dhaka, Mexico, China, Cairo, and elsewhere.

How can we measure the work of over 50 years? Clearly her efforts were fraught with obstacles and setbacks. But confrontations with the Vatican and conservative political regimes did not stop her. If unsuccessful in a particular endeavor, she would just try again—and again.

But the world was changing, and Dr. Sadik understood the interconnectedness of multiple issues: education, family planning, and economic development. During her 30-year tenure with UNFPA, the organization established 110 field offices with programs in 142 countries. Use of contraception (according to USAID measurement) grew tenfold; average family size diminished from six to three children. Maternal mortality remained high but has shown a 14% reduction since 1990.

Throughout this story, the author included family information and considerable detail about programs and people—all a part of Dr. Sadik’s life. The information is predominantly taken from interviews, causing the narrative thread to bog down in spots. The author includes interviews with women who have firsthand experience working with the issues Dr. Sadik championed. Here, in sum, are examples of many of the problems, still extant today: vaginal fistula, human trafficking, female circumcision, black market blood donation, gang rape, and prostitution.

Synthesis of the more wordy contributors, without altering the facts, would not have taken anything away from the image that forms of this remarkable woman, while interspersing this information between biographical chapters is distracting. Instead, as a collection at the end of the biography, these vignettes would stand as evidence of the groundswell of pro-women advocacy emerging throughout the world.

It is no surprise Dr. Sadik remains active in the world of international health and advocacy. After 46 years, retirement to a life of leisure proved impossible. At age 82 she remains a special envoy on HIV/AIDS for Asia to the UN Secretary General.

Nafis Sadik is a woman who set out to “change the world”—and in many ways she did just that.