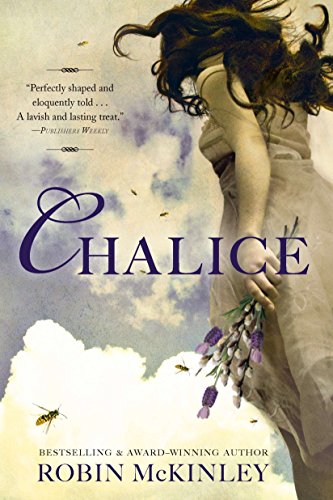 ACE Fantasy, September 2008 Robin McKinley’s books always wander a little, especially at the beginning, and this one is no exception. In fact, this one is almost the proof of the rule: it’s made of four parts, the first two the longest and the most wandering. But the way the book is structured, it doesn’t really matter that much, and isn’t nearly as annoying or distracting as it would have been in a less-established or experienced writer’s work. Quite the opposite, in fact, because the wandering lets us see this new world the way its main character Mirasol sees it, which avoids all the tedious explaining that a brand new world would otherwise require, and tells us something about her mindset and how she sees the world. Mirasol is new to a very important role in a world where the mental state of the people who rule it directly impacts the way the world works. Her lack of training lets us discover things with her, and the wandering comes off as her own search for direction—and when she finally finds it and knows what she has to do, it is less of a “Oh my God, finally!” moment and much more of a “Let’s see what we can all do about this” moment. Underlying it all is Robin McKinley’s love of sumptuous detail and clean understanding of how people are, how they live, and how they think. Everyone comes across as real, with goals and motivations of their own, and the world is awkward and hard enough to be realistic, but dangerous enough and strange enough to be beautiful and addictive. The book is sometimes a little difficult to understand, but it’s almost impossible to put down, perhaps because of the slight spur of not understanding and the way it relates the reader to the main character’s place in the world, combined with the lushness of the world. I came out of this book with only two regrets. One, that the prince always has to change to make everything all better, even though it seemed, for once, that he wouldn’t have to in this book (though the manner of his saving fit perfectly with the plot and its rules, and made a wonderful sort of sense in the end). And two, that it wasn’t longer. It would have been wonderful to get more of those last two parts, more story, more interaction. But the story is about how Mirasol gets to the position of McKinley’s classic female heroine, and not as much about what she does once she’s there. There isn’t a sense of being deprived of story or plot or entertainment—only the idea that it would have been beautiful to have stayed a little longer, tasting honey, feeling the warmth of Elemental Fire, listening to the buzzing of bees, and seeing how the weird, new, unusual world of Willowloands’ functions and lives. If you’re a fan of McKinley’s work, you’ll enjoy this one; If you’re new to her work, you might find this one strange, since she doesn’t spoon-feed anything but beautiful words, but hopefully it will coax you to find more of her stories to read. Samantha Holloway is a freelance writer and editor, and is working on her first novel. Her most recent short story is in Fiction International’s FREAK issue and an upcoming anthology, and her academic work has appeared in The Essential Science Fiction Television Reader, and at various conferences.