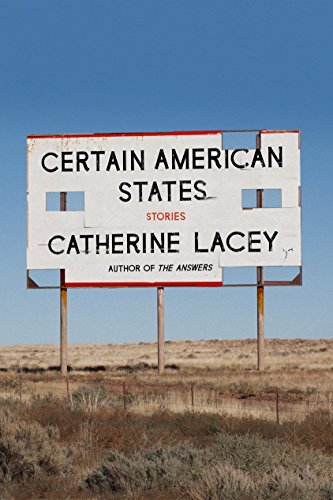 The characters in Catherine Lacey’s superb collection of stories, Certain American States, are often defined by what they are not. A “not-widow” speaks to her “not-son” at a gravesite. A “nonmonk” goes to a kids’ movie to see a cartoon. A woman thinks about inviting over a man she’s “recently been uncelibate with.” This clever approach invites readers to cozy up with these characters. This is how we think, too—at least in our weakest or most vulnerable moments. We also latch onto easily defined labels. We also let ourselves off the hook. We’re not having sex; we’re “uncelibate.”

And that’s what these stories are about, the rich interior lives of these characters, expressed through sprawling sentences that would lend themselves well to a one-woman stage show. Even the dialogue is rendered in italics, as if we’re hearing the exchange through a filter of mental defenses and qualifications, all of which works brilliantly. The push and pull of this. The certainty and uncertainty. The reaching out for intimacy and the risk involved with that.

Plot happens, too, quirky turns and surprises that will remain surprising and unspoiled here. But surprises occur with language as well, one of the many joys of reading these stories. When an art teacher tries to solicit a reaction from her class, she’s met with stony stares: “The silence, I thought, could choke a person.” She tries sarcasm, but still no response: “I felt as if I were standing on a building ledge, a hard wind blowing in my face.” Later, after a dean reprimands her: “I felt like a map that had been refolded the wrong way.”

In the title story, a woman, after receiving devastating news on the phone, is reminded “that after a certain large earthquake or hurricane, a major river temporarily ran in the opposite direction.” The deadpan delivery provides the punch here. Another woman compares the bad habit of smoking to infidelity: “if you have low-grade, persistent infidelity habit there is no low-grade persistent infidelity section in a restaurant or fifty feet from a government building and there is no patch for kicking your infidelity habit.”

If there’s a theme that runs through these stories, it has something to do with imperfect love, or as one of these young characters expresses it: “the conditional and imperfect nature of human-on-human love,” this coming from someone who once wanted to be a youth minister. Imperfect love comes with obligations.

In the story, “Because You Have To,” one of the best in the collection, a girl thinks back on her brutish grandmother, whom she calls a fascist: “Do I sometimes think fondly of her? Do I have a choice?” Even the simplest of behaviors, such as answering a phone, are accompanied by moral imperatives: “I answered the phone because it rang and that’s what you do. That’s what you do for the person who calls your phone. You hold up your side of the bargain. It doesn’t matter how much I want to throw the phone straight through the screen door sometimes.” The “you” here implicates all of us. The “you” throughout these stories is a huge presence.