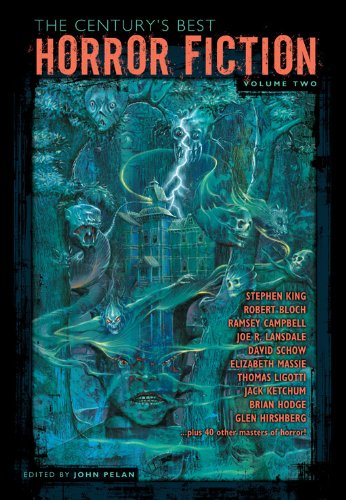 This is the second volume of John Pelan’s The Century’s Best Horror Fiction covering the years 1951 to 2000. Much of what was said about the previous volume could apply this this second one so instead this review will try to focus on what is new and interesting for the horror or literary fan during the second half of the century in Mr. Pelan’s collection.

It was during this second half of the previous century that Mr. Pelan became an editor and writer in the genre so it is not surprising that his brief introductions to many of the later pieces in the 1980s and 1990s offer personal insights into his interactions with authors as reader or colleague. While it makes sense that those we have the most contact with would stir an editor to comment, this sort of personal recounting could also be applied to earlier works in the 1950s and 1960s to give us a deeper understanding of why a particular story was chosen. This feels necessary given the lack of a definition of horror, though he references such a definition vaguely a few times, and his general rules for choosing a piece—best per published year but no author chosen more than once.

There are a few great analyses of the field both in terms of general horror or literature trends and that year’s particular challenges at the beginnings of some stories. In general, the quality of the introduction to each story is higher than in the first volume but most still only titillate and do not satisfy curiosity about why a particular tale made the grade or how it reflected the world around it or challenged the common trends of a particular year. If “Lonely Road” from Richard Wilson reflects a very 1950s mentality, does Popp Z. Brite’s “Calcutta, Lord of the Nerves” give us insight into why horror as a genre didn’t die in the early 1990s? At times, Mr. Pelan mentions awards a story earned and yet this is not mentioned in every case so how important were literary awards to his determination of the “best of” every year and if not in every year, why not?

In the first volume 44 male authors and only 6 female authors were chosen as the best of each year from 1901 to 1950. Surprisingly these numbers are hardly changed between the two volumes with the second half of the century counting 43 male and 7 female authors, basic research on the writers revealed. What has happened? Are women still struggling to get published in the horror field? No, though again women are greatly outnumbered by men in terms of publication credits in horror, they are publishing more than in previous generations, especially in the newer genres of horror romance and urban fantasy, both populated by the monsters we strongly associate with horror fiction.

Could it be that women are simply publishing more horror or horror related novels than short stories and thus they remain far behind their brothers in this second volume? What do Everil Worrell, Anna Hunger, Dorothy K. Haynes, Elizabeth Massie, Lucy Taylor, and Caitlin R. Kiernan along with Ms. Brite above, possess that other female authors didn’t over the five decades Mr. Pelan selected his “best of”? Is it a matter of their sex, a gendered view of the world or a reflection of that year’s crop of stories? A reader would need to do her own research to determine this.

In the course of a century, any historian of literature would tell you that what is accepted or desirable writing changes often in subtle but sometimes in stark ways. This second volume certainly feels more familiar to any reader under 50 the further and further she reads but does this reflect actual changes or merely a common slang or terminology in settings that are more modern. It is common enough to hear that all of society has gotten more violent and that we are being numbed to the horrors around us, yet is that reflected in these stories?

Technology seems to play a larger role in many of these tales but there are still the standard horror tropes of forbidden knowledge, family secrets, creepy locales, and ghosts. One cannot help but wonder if all the stereotypes about horror fiction are true or if the field has changed yet Mr. Pelan offers no insights.

At times, in an introductory analysis Mr. Pelan discusses major trends that year and one repeated one seems to be a move toward novels and movies though this is only a discovery the reader might believe to be the case not a statement of fact born of any research that our editor did in two and a half years of working on this two volume anthology. Why are some authors so very prolific such as, Ray Bradbury from volume one, while others’ work, such as Michael Reaves from volume two, could barely make up a decent sized book? These questions, and others, could have made for a very comprehensive look back into the previous century.

Overall this volume has over 150 more pages than the previous and this is without an introduction or conclusion. While the average length of story in the first volume hovered around 20 pages, there are much longer pieces in the second half of the 20th century, some certainly fall into the novelette range and one is a novella from Fritz Lieber entitled “Horrible Imaginings”. But the short story, what we today might call a flash fiction or as Mr. Pelan writes a short, short story is represented as well in the atmospheric Fredric Brown tale “The House”. Length never determines a work’s value beyond the payment per word for the author but did the word count affect Mr. Pelan’s choices or does the increasing general length of horror tales reflect reader or publisher preferences?

For the second of a two-volume work, overall analysis or a summary by the editor seems shockingly missing. This volume ends simply with the final word of the final story, Tim Lebbon’s “Reconstructing Amy,” and has no concluding remarks we might mediate upon. Horror is supposed to get us to think not just simply feel and for that many readers would appreciate a little guidance even if they might disagree with the editor’s opinions. This leaves volume two much like volume one; a large collection of short stories and nothing more.