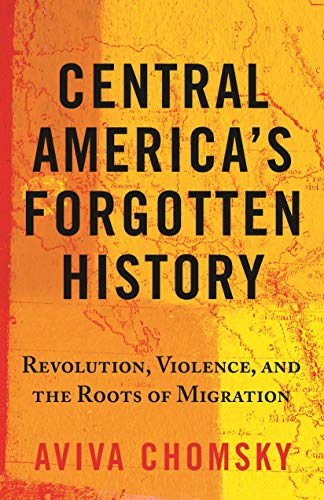 “Chomsky wrote Central America’s Forgotten History because ‘most US Americans, even those who decry the abusive treatment of immigrants, remain blissfully oblivious to the histories migrants carry.’”

Aviva Chomsky wrote Central America’s Forgotten History because “most US Americans, even those who decry the abusive treatment of immigrants, remain blissfully oblivious to the histories migrants carry.” The author seeks “to find clues as to what some of the invisible, unheard voices hidden within them might have to say.”

Central America’s Forgotten History explores how “struggles over historical memory” “can be very political” in the countries of El Salvador, Guatemala, Honduras, and Nicaragua. Chomsky begins with dispelling “the Black Legend” “that serves to cover up some more inconvenient similarities, contrasts, and connections between British and Spanish colonialism.”

The author does contrast British “settler colonialism” based in “eliminating” and “replacing” native peoples. This contrasts with “ruling over the people they colonized—like the Spanish in Mexico and Peru, or the British themselves in India.” (Emphasis is the author’s.)

In Latin America, “the Church claimed rights to evangelize Indigenous peoples, the Crown to tax them, and the conquistadors to enslave them.” The Spanish needed the native peoples for labor, even after the importation of Africans, in ways the British did not.

The population of Central America dropped from five to six million to a number so low that it has only recovered to some 600,000 people by 1821. Chomsky discusses the exploitation of the native and the imported African labor but not the effects of disease on the population.

Spain ruled Central America as part of Mexico, which won its independence in 1821 although Central America became its own nation in 1823. Then “in 1838, primarily through elite squabbles over power and territory” it became the nations, more or less, that we know today.

Interest in Central America by foreign nations began while still under Spanish rule. Although the British efforts, even during the American Revolution, are not mentioned here. “In the United States, independence meant a surge of settler colonial expansion that incorporated Central America in its sights.”

Central America played an increasing role in the United States economy. “Thousands of privateers or filibusters” from the United States, “organized private military expeditions into Latin America after 1848.” From the eastern United States “the cheapest and fastest route to California” and its gold fields went through Nicaragua.

By 1870, the Central American governments sought to modernize with loans from Britain, Germany, and the United States. “The coffee boom,” however, also “brought land grabs, plantation agriculture, railroads, and forced labor” by victimizing the local peoples.

The author quotes President Theodore Roosevelt’s 1904 racist justifications for intervention in Latin America that really protected American investments. United States officials assumed the “right to intervene if it simply disapproved of the way a Latin American country was handling its affairs.”

Later presidents have ruthlessly carried out this doctrine almost to the present. Starting in the Cold War, “the United States came to see nationalist movements that sought their own, independent forms of economic development as existential threats.” “Cold War counterrevolution targeted not only communism but virtually any movement for social change.”

The native people of Central America always resisted. Even “Indian communities battled internally and with each other.” “The revolutionary movements that swept El Salvador, Guatemala, and Nicaragua in the 1970s drew on buried memories of resistance.”

The United States government repressed reports of the atrocities by the Central American governments and the media ignored the situation.  “The isthmus was left riddled with broken communities, broken bodies, and broken memories.”

“Central Americans have been migrating for centuries.” “Population growth, land exhaustion, and state sponsored colonization after World War II” led to migrations to many areas of the United States. The greatest numbers originally came from El Salvador and Honduras, “fleeing political violence” in the 1980s.

America has forgotten even its recent past with regard to Central America. Congress would set quotas on Mexican and Latin American entry only in 1965 and would regulate immigrant status starting in 1986. American hysteria over the Hispanic and Latino migrants only began in the 1990s.

The great violent dark period came to an end for El Salvador, Guatemala, and Nicaragua in the 1990s. “But poverty, land struggles, and violence did not end with the signing of formal peace agreements.”

Central America’s Forgotten History is a thesis on what today’s America forgot or never knew about the history that drives emigration from Central America. As such, Chomsky omits some history in this concise book while more recent relevant events receive more attention. The book has a glossary and annotation.