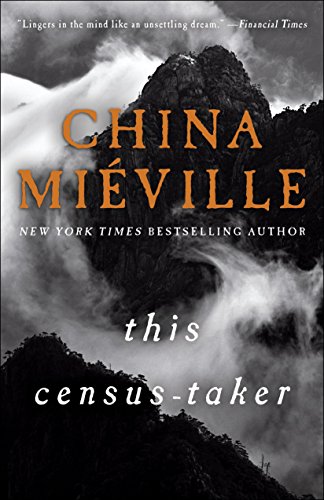 “this novella is brilliant. Beautiful prose filled with imagery that fills the imagination with dread and worry.”

There is a quote attributed to master crime writer Elmore Leonard that goes like "If it sounds like writing, I rewrite it. Or, if proper usage gets in the way, it may have to go. I can't allow what we learned in English composition to disrupt the sound and rhythm of the narrative."

Before getting deeper into that quote, it needs to be said that This Census-Taker is a brilliant piece of fiction. Surreal, disjointed, confusing, intentionally oblique, full of raw emotion and strange imagery, it is masterful world building without ever truly showing the world that is being, or has been, built.

At times jumping from first person to second person to third person, Miéville is obviously playing with his words like a child playing with blocks. Building, tearing down, rebuilding, letting the reader flounder on the infirm footing of an architectural narrative that threatens to crumble and fall apart at any second.

What is it about? Still trying to figure out that one. Honestly, it probably doesn't matter a whole lot. Is the setting post-apocalyptic? A dystopia? A fairytale? That is never explained.

Is it science fiction? Fantasy? Magical realism? It depends.

Which brings us back to the Elmore Leonard quote. China Miéville is writing. The reader will see that, feel that, know that from the very start. There isn't a single sentence or paragraph in This Census-Taker where the author isn't felt. The novella is as much a journey for the writer as it is for the reader. Hand in hand, writer and reader walk down a winding, steep, rocky path that is narrative yet isn't. This can be troubling for some, rewarding for others, and downright confusing for most.

As stated above, this novella is brilliant. Beautiful prose filled with imagery that fills the imagination with dread and worry. There is an emotional punch to the book that very few writers can accomplish. Yet unfortunately, if this is a reader's first introduction to Miéville then it could be their last. The surrealism is almost overpowering and the lack of a central understanding as to what the hell is going on will turn many off.

But for those brave few, This Census-Taker is well worth the journey that China Miéville obviously wanted to take and must have hoped others would walk with him.