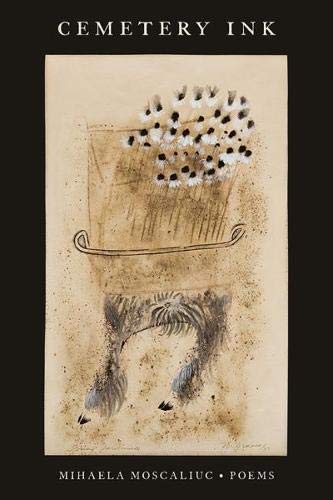 “Cemetery Ink takes you on a poetic journey to various places, such as psychiatric hospitals, haunted islands, goat pastures, streets teeming with homeless women, and invites you to reflect on oil paintings, cemeteries, and the history of massacres.”

Professor Mihaela Moscaliuc, born and raised in Romania, teaches English at Monmouth University, New Jersey. She has also translated the poetry of Romanian poets into English. Cemetery Ink is a book of English poems drawn from binational sensibilities, some poetry ingrained in Romania, some in the United States, some in both countries.

Several poems invoke the images and events of Iasi, the intellectual pivot of Romania, a city with a substantial Jewish population before the two World Wars but no longer so. “From the rented window” explores the town’s history and finds “this black Sunday” in June 1941 when “Over 13,260 Jews “were murdered. “Among the perpetrators: students, factory workers, craftsmen, veterans, neighbors.” The poem begins with “Across the street, the man urinating against the bus stop fence/shakes it like there’s no tomorrow” and ends with “Across the street, 16th-century Golia Monastery, town’s darling, /basks in stadium floodlights.” The poem confronts the readers to tie the poem’s internals with its ends.

Other poems draw attention to the helplessness of Iasi women. “There are so many (homeless women), shouting at no one, disputing/ accusations. . . . They pose no threat.” There is “the woman who’s claimed the back row” in a tram in Iasi. “This next stop/would have been mine, / but I’m not ready to leave/or stay.” The woman is stoic as she does not react, “When tram doors lag open too long/and silence escorts the gusty chill.” There are women in the Iasi psychiatric hospital. Mara: “I couldn’t carry the simple task of retracing/my face from memory.” Leti: “After I died at stillbirth/I stabbed a man.”

Moscaliuc turns to goats to connect Romania with California, alienage with assimilation. Goats and goat milk distinguish Romania as a European country. However, the treatment of goats in other nations is brutal. “Goatscape” highlights the murder of goats in the Dominican Republic “machine-gunned/ from helicopters, sterilized, collared for tracking.” “Assimilation—The Lamancha goat” portrays the importation of the Murcian goat, “Roman-nosed and docile by all accounts” into America. “Mrs. Eula Fay Frey,” who bred the first Lamancha goats in 1927, “saw much value in” the goat’s lack of mischief. Lamancha represents the assimilation of aliens into the “American mainstream.” Despite assimilation, the Lamancha goat “was still not spared charges of inferiority:/ those ears—alien, elfish—and those teats too.” The foreigner turns domestic, but with ridicule.

“Culpable metaphors: On Henri Rousseau’s La Bohemienne Endormie, or Sleeping Gypsy” is an Ekphrastic poem. Rousseau’s oil painting depicts a dark-skinned woman, a mandolin player, sleeping on desert dunes while a lion is standing by with no gestures to attack her. “After he rhymes the lion’s eye with the moon, / the wanderer’s face with the black eye of the lute, / the artist steps outside, by the water jug, / to watch the moonlight effect complete his creation.” Thus, the poem captures the painting’s observational essentials before roaming away into motley associations, thoughts, and emotions—the methodology of Ekphrastic poetry.

The painting makes us “taste life on the brink of destruction,” though the painter is “naïve, primitive, a jungle fantasist.” The poet reminds us that what the woman in the painting “dreams, no one knows/though poems brim with speculation.”

Nor do we know what the sedated but wide-awake lion is daydreaming. “I like the zombie lion prancing around, all chill/like he’s been sniffing glue. Nothing frightening/about him, but that’s a familiar disguise, /Maybe he’s a pimp.” There are no caring predators.

The sleeping gypsy poem subtly connects the woman in the painting with cruelty in French North Africa, pointing at a “wife dead on giraffe carcass baited with poison, / mother gunned down in the cedar forest of Algeria.” Maybe, a woman is lying exhausted “in a land dull as burlap” after a son, “the last of the Atlas, has been “sold by poachers to Moroccan royalty.”

Reacting to Rosseau’s Bohemienne, the poem finally turns to “Roma gypsies.” The Nazis murdered 21,000 Romani at the Zigeunerlarger camp in Auschwitz. “Mother, father, brothers gone, / her sister’s eyes too . . . packed in formaldehyde, / posted to Karen Magnussen’s Berlin lab/ so she could learn how to manipulate pigment.” Even now, one could hear curses or casual rebuff “I don’t rent to Gypsies.”

In several poems, Moscaliuc brings out the themes of unkindness by recruiting disturbing, even morbid, images. “The cat, motherless, has wet the mattress . . . We sit the night. She chews her tail. / When the sun buckles, I abandon her/ on the neighbor’s doormat and taxi to the airport.” A callous departure, leaving behind friends and pets, is unkind. “I’m no longer good for kindness. / Something inside me takes all the good.”

Some poems capture experiences through horrific analogies. “Contrary to rumors, I am not averse to fetid smells, / do not flee from them, unless it’s my heart/ you are baking, butterflied with a blunt knife, / without bay leaves, wine, or cured olives.” The readers might wonder, and some may research, whether Aretaeus, a  second century Greek physician, from whom the poem “borrows language,” used such aggressive recipes to cure asthma, a disease he discovered and treated.

Another poem recalls La isla de las munecas (the island of dolls) near Mexico City filled with dismembered dolls, hanging by the trees to mourn the death of a poor girl who died there. “Don Julian pushed a wheelbarrow/ stacked with salvaged limbs, matted heads of hair, gouged eyes.” The legend has it that Don Julian Santana Barrera ornamented the island with decapitated dolls to summon the dead girl’s spirit. He died in 2001 at the same place where the girl died, leaving behind an eerie tourist place.

Through horrid references to historical stories, real and unreal, Moscaliuc protests the injustices against vulnerable minorities and disempowered women in all parts of the world.

Cemetery Ink takes you on a poetic journey to various places, such as psychiatric hospitals, haunted islands, goat pastures, streets teeming with homeless women, and invites you to reflect on oil paintings, cemeteries, and the history of massacres. The poems pop up like websites, and the readers choose how far deep they wish to surf for meaning.

Reading international poetry spanning over disparate cultures requires labor, research, patience, and determination to decode what appears to be opaque, unreachable, even futile. The readers of Cemetery Ink, unfamiliar with the content, need to work hard to understand the poems. However, comprehending international poetry after a struggle is satisfying, both intellectually and emotionally.