Cat Kid Comic Club: From the Creator of Dog Man 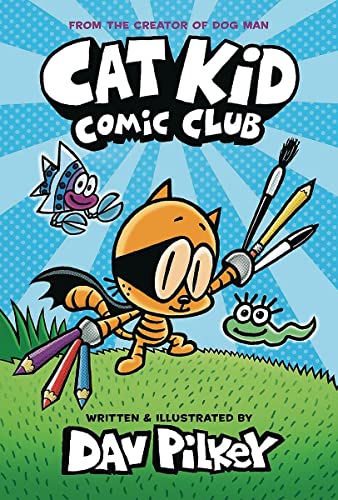 “A world that kids will love!”

Dav Pilkey has done it again in the first of his new series, Cat Kid Comic Club! He’s created a world that kids will love, full of adventure, time travel, action figures, slapstick violence, and poop. Smart teachers will use this book to encourage their own students to tap into their creativity and make comics.

Any author who has done school visits will recognize the steps. You start by talking about how to get ideas. In this case Li’l Petey instructs the comic club to “draw a line on  your paper. .  . . Now on the left side, write five things you love. . . . On the other side write five thngs ya like to do.” Then the students are encouraged to pick things from each list and turn them into a story. In the first example, it’s a comic about a toothbrush who wants to be a lawyer for dinosaurs. The exciting possibilities simply leap out onto the page.

The second step, also all-too-familiar to visiting authors, is that the kids will be too afraid of making mistakes to put anything down on paper. Li’l Petey encourages the young club members to “get over your fears! Your assignment for tomorrow is to fail!” When the homework is to make the “worst comic,” suddenly the task isn’t so daunting and the club members all dive in, coming back the next day with a hilarious variety of stories.

And now comes the last predictable step. The teacher is horrified by the violent endings, the focus on farts and poop, including a hilarious page of “How to draw my dog’s poops in 3 ridiculously easy steps.” The best part is where the budding illustrator gives the poops “some personality,” ranging from Pirate Poop to Betty Poop, Winnie the Poop, and Storm-Pooper. The teacher (not L’il Petey but another more serious character named Flippy) is appalled and declares that “From now on, everyone’s comics must be wholesome . . . and uplifting . . . with good values and morals.” If that sounds like a death knell to creativity, it is, and the club members all scamper away.

Fortunately, some doctors save the day by explaining to Flippy that he’s overreacting, that “adults make up stores about that stuff all the time . . . and we call them artists . . . and geniuses . . . and visionaries!” Flippy realizes his mistake and tells the comic club members they’re free to be as creative as they like, to draw and write about what interests them. The moral of the story is “You’ll never be able to please everyone anyway! . . . So just focus on what you love!” That’s good advice for any writer and artist.

This quickly devoured comic is more than a fun story. It’s full of useful tips about how to write and draw and gives examples of the wide variety of stories the graphic format allows. Any child who reads it will quickly start their own comic. And chances are it will involve some poop.