A Castle in England 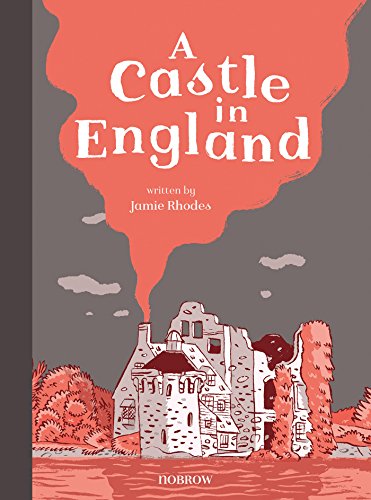 "an engaging idea that does not quite achieve its aim . . ."

The purported aim of this colorful little book supported by the Arts Council, England, and the National Trust is to recreate the “rich and often dark history of Scotney Castle in Kent” from Medieval times to the Edwardian Age. The author, James Rhodes, spent three months as Writer in Residence working with the castle archivists to create five short graphic fiction scripts illustrated by “five exciting artists.”

Each of the five segments (Medieval Era, the Elizabethan Era, Georgian Era, Victorian Era, Edwardian Era) has a number of components: a family tree of the people occupying the castle at the period; a graphic story depicting a fictional character enmeshed in the events of the times e.g. The Laboror: Medieval Era, The Peasant’s [sic] Revolt 1381; the historical context of the emblematic character; and finally a brief factual piece about Scotney Castle during the period.

This is an engaging idea that does not quite achieve its aim of animating Scotney Castle. Is the intended audience children and young people who are expected to focus on the cartoons, or an older audience who are assumed to be interested in historical facts? It seems that neither audience would be fully satisfied.

Perhaps the components of each era could have been reordered to ensure that the castle and its family were the clear frame of reference. And photographic or other depictions of the castle would have been welcome.

The graphic elements that occupy the largest number of pages are frankly disappointing. Although the work of five different artists none of the graphics seems to be distinctive or particularly engaging. And it is hard to see why such a color scheme—khaki grey and various dullish shades of orangey red—was thought a good bet for a book competing with assorted other items in the Scotney Castle Gift Shop or elsewhere.

To a person who has not visited Scotney Castle this book seems like a good idea waiting to be realized. However, for the fascinated visitor it may be a light-hearted reminder of a day well spent.