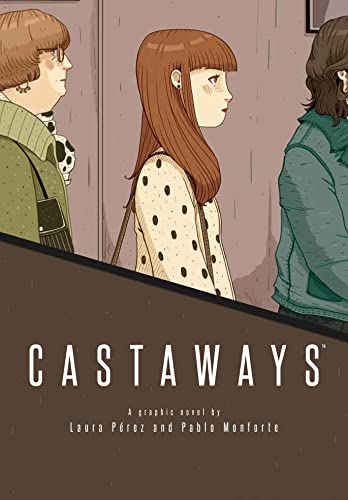 Castaways is a beautiful book, the drawings clean and simple, yet packed with emotional power. The words are equally spare and vivid. Together, they show how well a graphic novel can convey a sense of time and place and tell a story that feels both deeply personal and universal.

The sections are cleverly distinguished by color; each new hue sets the reader up for a change of focus in time and in character. The story opens in Madrid in the ’80s and closes in Barcelona in the ’90s, shifting between the two time periods throughout as well as alternating between the two main characters, a young woman and man. Alejandra and Julio find and connect with each other in both places a decade apart, only to separate again. Both main characters don’t inhabit their skin and their worlds comfortably. They have friends, family, a community, but feel like outsiders.

Alejandra, the woman, opens the book as a college student. She sums up the experience with worldly ennui:

“The university isolates you and protects you at the same time. It’s like a shelter whose inhabitants are all newcomers, innocently carrying their lives and sorrows around. Just like me.”

The only place she feels truly comfortable is among books:

“I completely lose myself in these strange tales, between these lines that offer me a very different kind of transportation than the one I know in real life.”

We first see Julio a decade later in Barcelona, equally ill at ease. He describes his office as excruciating in its vapidity:

Like Alejandra, Julio finds an escape in words. He’s a writer in his younger days, but he gives it up:

“Maybe I just don’t want to create stories out of my own fears anymore. I don’t want to sound weird, but maybe I was just writing to keep myself company. To fill a void.”

That void echoes heavily in all the pages as both Alejandra and Julio try to escape it, to find meaning in their lives. When they meet each other again in Barcelona after years apart, there’s no easy solution. They mean something to each other, that’s clear, but neither of them seems sure what that is exactly.

Castaways isn’t a book with easy answers. Instead, it takes us on a thoughtful journey. This isn’t a love story so much as an exploration of existence, of being alone in a crowd, of looking for a place and meaning. Books, including this one, are clearly a place where questions can be asked and meanings discovered, if only one looks hard enough.