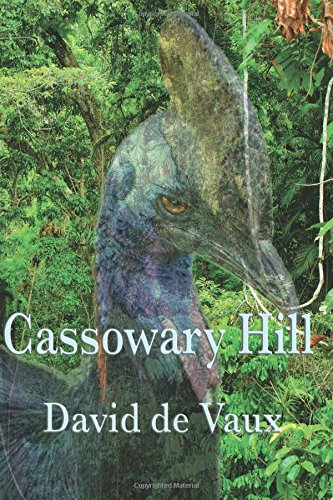 “A captivating tale of intrigue that combines comedy and romance with a trenchant commentary on imperialist atrocities in Southeast Asia.”

It’s probably true that most people on this side of the Pacific would not know what a Cassowary is, nor a Lumholtz, nor a gympie gympie stinging tree. For this reason, Cassowary Hill, named after the Cassowary, a tall tropical bird that inhabits the rainforests of Queensland, Australia, is often mesmerizing, the lushness of the novel’s exotic tropical ecology skillfully evoked by the author’s descriptions of far-flung tropical locales and colorful characters on the other side of the globe.

But David de Vaux’s densely plotted, literary debut novel about all manner of trysts tropiques is about much more than a tropical bird. It is a captivating tale of intrigue that combines comedy and romance with a trenchant commentary on imperialist atrocities in Southeast Asia.

The main protagonists are the romantic, occasionally reclusive, yet eternally curious narrator, the ghostwriter and publisher Tom Pryce-Bowyer; the photo-journalist/activist Bia Moraes, a successful freelance photographer known for her “arresting and sometimes disquieting style”; an old acquaintance of Tom’s from his days in Fiji, Dr. Emmi Jay (Emjay), a senior editor at a New York publisher, with whom Tom strikes up a long-distance romance; and the reckless, womanizing, ex–British army officer, Jack Tryvet, “an almost unfathomable person . . .  a Graham Greene character who was equally destructive to himself and to others.”

Bia, who originally hails from Portuguese [East] Timor but has since settled in Australia, was in East Timor at the time to capture the referendum on film and experiences a terrible personal tragedy there.

One night, as Tom, Bia, Jack, and Bia’s friend Frida debate imperialism and human rights late into the evening at Tom’s rainforest refuge, Cassowary Hill, the story of the machinations of an American general, Daniel Birns, who was commissioned by the White House during President Clinton’s tenure to stop the aforementioned atrocities in East Timor—which he apparently, and willfully, failed to do—comes to light.

Birns, who has since retired from the army, is now under consideration for the new post of “CMI”—Chief of Military Intelligence—in the U.S. government; however, the Senate hearing that has to approve his appointment has not yet taken place. Jack and Frida hatch a plan to bring to light Birns’s role in the East Timor mass murders and thereby prevent “America from having an accessory to mass murder in a top intelligence position.”

Jack’s secret past, however, soon turns out to be his Achilles’ heel. As the pursuit of Birns continues, a surprising plot development brings Birns himself to Cassowary Hill (much to Tom’s alarm and displeasure). Birns and Jack meet under the cover of darkness and secrecy, and a dramatic denouement, one that delivers some measure of poetic justice, ensues.

Cassowary Hill is by turns entertaining and introspective. It is populated by memorable characters—both human and animal—in settings that vary from remote Australian rainforests to urban America and lesser-known locales in the Indonesian archipelago, Malaysia, and New Zealand. The lovelorn Tom’s desperate obsession with the not-so-coy but distant Emjay provides some comic relief, despite the many poignant moments they share. Alfred, the Cassowary, is a recurring character who acquires symbolic, even metaphysical, significance by the end of the novel.

The narrator’s reflections on existential questions appear in striking passages such as this:

“Solitude and isolation have many advantages for the mystic, the artist, and even the scientist. Relishing my solitude at the time, I thought of Annie Dillard at Tinker Creek, inhabiting all three roles and turning her focus on the microcosmic environment of her own chosen isolation. The astrophysicist, or even the untutored stargazer, might stumble on the same prime truths by looking up rather than down. Here the ant-focused Dillard, I reasoned, met Galileo.”

Its philosophical musings aside, Cassowary Hill is also epic in its scope and opens an important window onto the imperialist-led atrocities and human rights violations in East Timor. At the same time, it never ceases to make the reader aware of the connections between human-engineered depredations, both political and environmental, around the globe and the precariousness of human relationships.