The Cassandra: A Novel 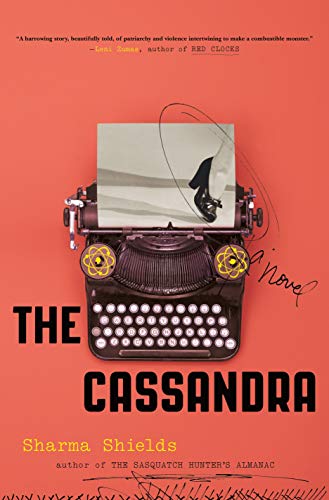 “The Cassandra, with its multiple parallels to the original story, might be the truest twist on the Cassandra myth ever attempted—and certainly the most relevant to our times.”

Sharma Shields’s first novel, The Sasquatch Hunter’s Almanac, defies expectations so thoroughly and delightfully that its darker elements and their painful implications never weighed too heavily. Though the story revolves around a young man’s search for his long-lost mother and the man with whom she giddily abandoned him as a small child, the fact that he not only remembers this man as a charming and imposing Sasquatch, but remembers him correctly, marks Shields from the get-go as a singularly imaginative talent.

Shields’s new novel, The Cassandra, starts dark and stays dark. The author’s merciless and savage wit delivers its share of comic moments, but the book is far more frequently enraging than funny. The Cassandra unspools the tragic tale of Mildred Groves, a young woman gifted with prophetic powers who flees a miserable home in rural Washington in 1944 to take a secretarial job at the new Hanford plant, the plutonium-processing wing of the top-secret Manhattan Project that produced the first two atomic bombs.

As with the Trojan princess Cassandra depicted in Aeschylus’ classical drama The Oresteia and Virgil’s Roman origin epic The Aeneid, Mildred’s uncanny prescience is more curse than gift. Like Cassandra, Mildred receives phantasmagorical, seizure-inducing visions of future death and destruction, but no one believes her when she tries to warn others of what’s to come.

Cassandra’s visions famously concern the fall of Troy at the hands of gift-bearing Greeks. Mildred foresees the unprecedented human suffering that will follow the deployment of atomic bombs at Hiroshima and Nagasaki. Mildred confronts these visions almost immediately following her arrival at Hanford, as she sleepwalks into the Columbia River, dancing across stones that become the skulls of countless humans, “people of all ages, small children, others stooped and aged” whose bodies are “trapped in the mud of the riverbed . . . blackened and burned, pockets of flesh half-melted.”

Mildred’s life at Hanford doesn’t start out so grim. She leaves home with her visions in remission. Her arrival is a victory in itself; it frees her from the clutches of a bitter and vindictive mother and sister. She lands a plum assignment with Dr. Hall, a lead scientist on the project, and she makes fast friends with a pretty, perky nurse named Beth who has a “gay, ringing laugh.”

In the company of Beth and the other husband-hunting girls in the Hanford barracks—and the flirtatious men who vie for their attention—at some moments The Cassandra seems to edge toward spunky, “gals in the typing pool” good times. Likewise, when the consistent quality of Mildred’s shorthand and the arresting precision of her predictions command the attention and near-admiration of Dr. Hall, the book hints at Hidden Figures-like unexpected triumph.

But there’s too much Cassandra in Mildred Groves for her story to arc toward anything but a dark, doomed mission. In some ways, The Cassandra, with its multiple parallels to the original story, might be the truest twist on the Cassandra myth ever attempted—and certainly the most relevant to our times.

Distilled to its essential elements, the curse of Cassandra is, from the outset, a cautionary tale about the damning consequences of withdrawn consent. The Greek god Apollo endows Cassandra with the gift of prophecy in exchange for the promise of sex, then transforms it into the curse of prophecy-never-to-be-believed when she changes her mind. It’s also a story of unpunished, spoils-of-war rape, which Cassandra suffers at the hands of Locrian soldier Ajax the Lesser as Troy falls.

By positioning Mildred at the center of the story, Shields wields her Cassandra’s unheeded prophecy less like a literary device in a heroic war saga than an infuriating reminder of the lethal power of patriarchy.

In a desperate attempt to abort the Manhattan Project, Mildred confronts Dr. Hall with her foreknowledge of the catastrophic consequences of completing and delivering the atomic bomb. “After they drop the bomb,” she predicts, “the men will look out of the windows of a plane named Mother. They’ll see the fires, the smoke. They’ll guess then what they’ve done. Some will celebrate but one of them will mourn. He will realize how those below them suffer.”

At first, she mistakes his awestruck, appreciative look for belief. Then, after a few condescending words about how Mildred might have really amounted to something if she hadn’t been born a “secretary from Omak,” Dr. Hall summarily dismisses her. “I could see from his face that he’d closed his mind to me. I was a woman, unpredictable and shrill. He muttered something about me nearing my menses.”

In Shields’ hands, this gift-made-curse sport of the gods becomes not personal but systemic. It feels less like myth or magic realism than reality itself.

In a timely take on the Cassandra story for the #MeToo era, Shields poses critical questions: Why do we ignore the truth when women tell it? Why do we compound the injury of rape with the insult of not believing the women to whom it happens?

With all due respect to Virgil, it’s high time we had a Cassandra story told by a writer whose primary purpose is not to sing of arms and men.