A Case of the Zaps 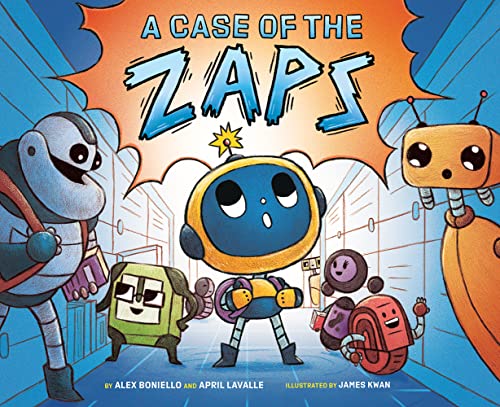 “A Case of the Zaps is zany robot fun for all the humans among us.”

A Case of the Zaps is a 21st century look at anxiety in little robots. The blue-faced protagonist lives on ROBOT-EARTH. His nickname is Pi, for short. He lives with his robot family and watches TV called Humans Among Us! There is lots of robot-y humor on every page. His favorite snack is DW-40. He entertains himself with playing soccer, doing karate, playing inside a tent, doing science experiments, and looking at bugs through a magnifying glass, robot style.

When his teacher announces that the class is taking a field trip to Olde Silicon Valley, Pi starts to feel anxiety, explained as “the zaps.”

He worried about what could go wrong as shown in the robot-y art.

Pi wanted to flee instead of dealing with his anxiety. Whenever they thought of the trip they would get the zaps again (notice the genderless pronouns because robots have no gender). One could argue that a truly genderless robot would not have a blue face. It would be purple or yellow.

An older reader not as savvy in robot lingo might get bogged down with the clever computer terms throughout the book—Central Processing unit, hard drive, cooling fans, etc.  But a young reader will love the robot lingo including Parental Units, booting up, “getting your sprigets in a sprocket, and software updates.”

Pi talks with Dr. Bleep Bloop about the zaps. The doctor explains it to him.

“And Pi never had a case of the zaps again.” Turn the page. “Just kidding!” This might be the best part of the book, letting readers know that feelings of anxiety happen throughout a lifetime, but it gets easier to deal with it the more you’ve done it. “Pi knew that managing the zaps would be a longtime process . . .”

The last line is a winner.  “And robots definitely know a thing or two about processing.”

The computer-related words are in a different font (similar to a 16-segment display) from the rest. The end papers are circuit boards in black and shiny primary colors. The art is bright and robot-like, geometrical and futuristic. Pi’s friends come in many sizes and colors. At the dinner table, Pi’s family eats bowls of cables, circuit boards, and they drink DW-40.

The book has layers of meanings that will be understood by different age levels. The authors’ note at the end explains the two authors’ own anxieties as children and is followed by a page of organizations that help with anxiety.

A Case of the Zaps is zany robot fun for all the humans among us.