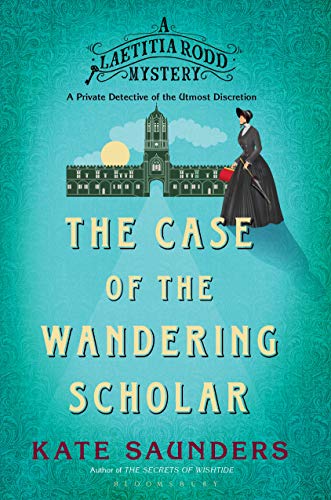 “thanks to the author’s skill, the plot is tight, the scenario plausible, and the narrative tidy and intelligent, conveyed with a wry undertone throughout.”

Many a historical novel has been set in Victorian England (in this book, 1851). Some of them use the setting as a merely a backdrop, but in this mystery the story can’t happen independent of time and setting. And thanks to the author’s skill, the plot is tight, the scenario plausible, and the narrative tidy and intelligent, conveyed with a wry undertone throughout.

The narrator, Letitia Rodd, is daughter of a clergyman and widow of an archdeacon. She definitely knows what’s Right and Wrong, and how to properly behave. But she’s not pompous and judgmental about it. Rather, she’s compassionate and honorable, a champion of Good against Evil, with a kind heart and humble mien.

She’s also impoverished, because her beloved husband died suddenly before making provisions for her. So at age 52 she lives with her landlady-cum-best friend and earns irregular income as “a private detective of utmost discretion.”

Most of her cases are channeled to her by her brother, Fred, “one of the most celebrated criminal barristers in London”—who is also a foppish, incurable rascal.

Mrs. Rodd’s case in this book, volume 2 of the new series, involves a missing person: Joshua Welland, the eccentric wandering scholar of title. He is estranged from his fabulously weather brother, Jacob, who is on his deathbed from tuberculosis and seeks reconciliation with Joshua before leaving this world.

The brothers were both in love with the same woman, Hannah, which caused their estrangement. By the time of the story, Hannah is long gone—but she proves to be a cause of trouble well beyond her demise.

Mrs. Rodd sets out to find the wandering scholar, tasked with delivering his brother’s letter begging him to reconnect. She bases her investigation at the home of clergyman Arthur Somers and his wife, Rachel. They date back to Mrs. Rodd’s married days, when Somers was her husband’s curate and Rachel a pious (and wealthy) refugee whom the Rodds took under their wing.

Mrs. Rodd aided in their matchmaking, and is very fond of both. Unfortunately, it soon becomes evident to her that Rachel and Somers’ curate, Henry Barton, are passionately in love and struggling to smother that love, and uphold their morals and ideals, by keeping ever so platonically apart.

Their situation echoes what happened among Hannah and the Welland brothers. Indeed, the situations end up being connected, though Mrs. Rodd must travel a circuitous path to find the link.

The plot takes its first sharp twist when someone poisons Arthur Somers. Rachel and Henry are immediately accused because of obvious motive and heavy circumstantial evidence. Mrs. Rodd must not only keep searching for the missing scholar but also exonerate the people she loves and believes are innocent. The plot takes a second sharp twist when another clergyman is killed under their feet.

The policeman Mrs. Rodd works with, Mr. Blackbeard, counsels that there are only three reasons for murder: “love, money, and the fear of being found out.” Mrs. Rodd believes from the start that the motive is concealment of some secret(s), whereas the police believe that passion fuels the dastardly deeds. Nobody has a clue about what passions and secrets actually compel the murderer, or who he/she might be.

As Mrs. Rodd travels about the Oxford area investigating, we get her trenchant observations on life in that place and era. Her voice feels authentic (and her parenthetical asides often add levity to moments that are stiff or somber in the appropriate manner of the times). “I know eavesdropping is wrong,” she says to the reader, “but must admit that my work had somewhat blunted my conscience in that area.”

Likewise, while always measuring her actions against her Christian beliefs, she finds herself “suppressing an impious wish that the Almighty would move in his mysterious ways a little faster.”

We get to know and like her because the author keeps the story within her first-person point of view. No side-tracking, no head-hopping. Readers only know what she knows, and have to piece the bits together along with her. That keeps the plot going, because the pieces just keep getting more confusing and intriguing.

Ironically, the murderer becomes obvious early in the story. That is, experienced mystery readers will spot the likeliest culprit quickly from familiarity with genre conventions. However, they have to wait until the end to learn the full backstory and motivation. Along the way, Mrs. Rodd’s journey and discoveries are satisfying to ride along with.

The whole forms a balance between intellectual puzzle and emotional drama, seasoned with historical detail. This gives what might seem at first to be a “light read” extra weight and depth without becoming “heavy.” Mrs. Rodd keeps the tone upbeat, and her honesty lets her face moral dilemmas fairly. She’s the right sort of character to sustain an interesting series, gathering new fans along the way.