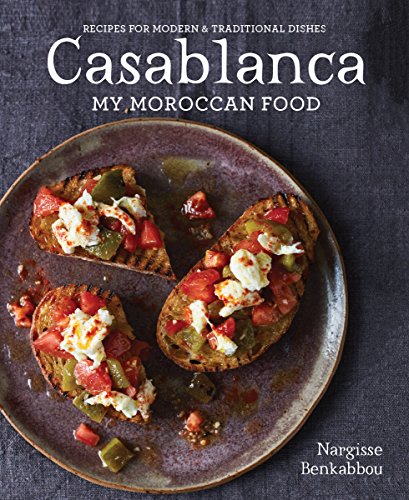 “this is a fun and personal book if you want to experiment with Moroccan flavors and eat some delicious preparations accompanied by wonderful photos of the finished dishes.”

The most important word in the title of this book is “My,” for this is a personal collection of one cook’s love of her home food, Moroccan food. The Moroccan-born, Belgian-raised, London-domiciled cook Nargisse Benkabbou’s charming and inviting book is a personal collection of her own cooking. It’s not entirely traditional Moroccan cooking, and it’s not fusion cooking either, but it is her own appealing cooking.

There are three elements to the title. First, “Recipes for Modern and Traditional Dishes,” is accurate; this is not a book of the most traditional and iconic foods of Morocco, but some traditional and many innovative, i.e., modern.

For example, the complex and magnificent Moroccan pigeon pie, bastila, made of warka pastry (Moroccan-style phyllo) that might be prepared for a truly special event like a wedding, is transformed into a family-style chicken pot pie. (Incidentally, there is no mention of warka pastry, transliterated as ouarka in French-language cookbooks). Many recipes are Benkabbou’s modern interpretations and innovations, but there’s nothing wrong with that. Her food is enticing.

Second, “Casablanca” seems to have been chosen because it emblemizes the modern and the traditional in Morocco, and of course it’s a familiar name to Westerners. It’s not clear if her family is from Casablanca, but none of the recipes are specifically Casablancan.

Third, “My Moroccan Food” is really what this book is about and that’s how it should be taken. This is the name of her blog as well. A recipe called “harissa and maple syrup roasted baby carrots with pistachios” one would never find in Morocco, but it sounds weirdly intriguing enough to want to make it.

Another example of an utterly non-Moroccan dish that you might give a try is “Moroccan eggs Florentine with harissa hollandaise.” A completely wacky recipe that is also not Moroccan is her “merguez burger with preserved lemon guacamole.” This laughable name strikes me as a concoction that a recent graduate of a culinary school would make to get a job at a trendy bistro in London where she now lives. It’s probably delicious.

As far as the traditional dishes that must appear on the table of every Moroccan family such as couscous, harira, mechoui, and the various tagines, many of Benkabbou’s recipes appear to be her re-interpretations of family favorites. Her “Mama’s harira,” a chunky soup typically made for Ramadan makes an appearance while her “grandfather’s mechoui with yogurt and mint sauce” is reduced from its typical serving as a roasted whole or half lamb to a family-appropriate 4 1/2 pound lamb shoulder. Its sauce of yogurt, mayonnaise and mint is odd for a Moroccan kitchen, as neither yogurt nor mayonnaise are typical and that goes unmentioned. Bravo to Benkabbou for attempting to provide a recipe for khlii, a kind of Moroccan lamb jerky that is used in cooking. Although she uses beef, it’s the kind of preparation one likes to see even if one never makes it.

When people talk about “North African food” they refer to three countries: Morocco, Algeria, and Tunisia. There’s a big difference between the flavor profile of these three even if all of them consider couscous as a staple dish. Moroccan food tends to be sweet and Algerian and Tunisian food tends to be piquant. So you may never come across a dish like “sticky ras el-hanout and peach beef short ribs” in Morocco, but you would identify it as Moroccan-influenced.

Benkabbou says she was concerned about providing yet another recipe for some traditional dish or another and therefore so many recipes have her or her family’s twist on a variety of dishes. As a result, you won’t learn much about Moroccan cooking other than getting the “idea” that lies behind it—and that’s a useful insight to have. She need not have been so concerned as there aren’t that many English-language Moroccan cookbooks out there. Perhaps she had French-language Moroccan cookbooks in mind as evidenced by the Arabic-English transliteration system she used which is based on the French custom (for example, chermoula for sharmūla).

All in all, this is a fun and personal book if you want to experiment with Moroccan flavors and eat some delicious preparations accompanied by wonderful photos of the finished dishes. For an understanding of the cuisine of Morocco you’ll need to go elsewhere.