Cartoon County: My Father and His Friends in the Golden Age of Make-Believe 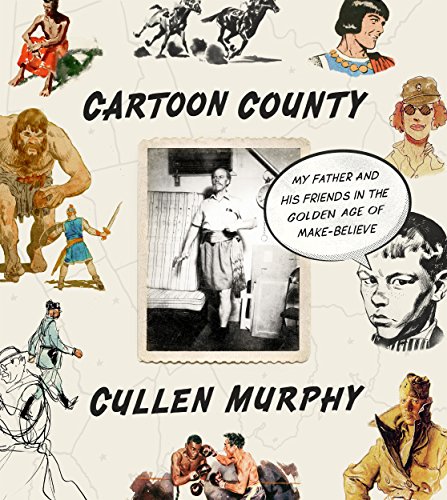 “Cartoon County is a wonderful read, a paean to a bygone era in art that will delight and inspire.”

If you were a child in the ’60s or ’70s and remember the days when newspapers featured the Sunday “funnies” in broadsheet 22-inch tall pages that were filled with rotogravure color comics such as Terry and The Pirates, Brenda Starr, L’il Abner, Dick Tracy, and Beetle Bailey; or recall sitting with a child and trying to explain the virtues of a stacked Dagwood sandwich in Blondie; or giggled at the antics of Hägar the Horrible, then you will thoroughly enjoy Cullen Murphy’s book Cartoon County.

Murphy’s father was a cartoonist in the ’50s and ’60s who drew Prince Valiant, and along with other artists and illustrators created an entire world that reflected the humor and heroic values of the post World War II era.

As a child hefting a Polaroid and helping his costumed dad strike a pose for the characters he would draw in Big Ben Bolt or Prince Valiant, Cullen Murphy gives a fascinating and insightful perspective on the life of cartoonists and illustrators who drew comics strips and worked at that time. (For the totally uninitiated the book includes many reproductions of comic strips as they originally appeared.)

The actual place referred to in Cartoon County is Fairfield, Connecticut, where many commercial artists lived at a time when there were no fax machines, scanners, or email. Being in close proximity to New York City, where most of the publishing industry resided, was crucial. One could live in an expensive Manhattan apartment or alternatively in the near suburbs of New Jersey, New York, or Connecticut.

And interestingly, as Murphy tells it, “Alone among the three states, Connecticut at the time had no income tax . . . you would enjoy a tax holiday, with New York City only forty-five minutes away.” All of which made it especially appealing to artists trying to make a living and having to commute to the city on a regular basis.

Murphy’s father, John Cullen Murphy, was part of a close-knit community of artists that shared a love for drawing, visual storytelling, and a shared experience as veterans.

Murphy makes piercing observations about the rigorous training of artists in those days in schools like The Art Students League and teachers like the influential George Bridgman, who had also been Norman Rockwell’s anatomy instructor—training that held much in common with the traditional schooling of all fine artists all the way back to the 1700s, whether they eventually made their living as cartoonists or not.

And of course one could make the persuasive argument that comic strips were not an entirely American invention. “Hal Foster [creator of Prince Valiant], when asked what the first comic strip was would point to the Bayeux Tapestry, created in the 11th Century . . . that tells the story of the Norman Conquest of England.” And let’s not forget William Hogarth’s The Rake’s Progress or the acerbic caricatures of Honoré Daumier.

Murphy also delves into the occasional impact of political correctness in shaping how comic strips presented drama or humor. “Magazines laid down in-house standards for gag cartoons, and newspapers had their own thick codex of rules. Profanity was impermissible . . . though you could resort to symbol swearing—#!*$%!&*#!—which was funnier anyway . . .”

Or weird conventions of the publications: “You could draw a woman in a bikini, but for some reason you couldn’t show a navel, even on children . . . The depiction of male nipples was also forbidden, which presented a challenge for strips about prizefighters, cavemen, or barbarians . . .”

Cartoon County is also a celebration of the artists of the World War II generation who even during the war never stopped being artists. They carted around watercolors or pencils and drew their surroundings or experiences overseas or wherever they were stationed. And during the war their work appeared in “. . . military publications like Yank, Leatherneck, and Stars and Stripes . . . Bill Mauldin, who participated in the invasion of Italy, won fame—and a Pulitzer Prize in 1945—for his single-panel cartoon Willie and Joe.”

This book is clearly a tribute from a loving son to a father he admired, a wide-ranging homage to a field of creation which has changed so much as to be largely unrecognizable today.

Cartoon County is a wonderful read, a paean to a bygone era in art. The book is appropriately printed on matte paper and abundantly illustrated with snapshots, photos of many artists, while also featuring their work—both in color and monochrome—a multitude of comic strips, sketches, and finished artwork that will delight and inspire.