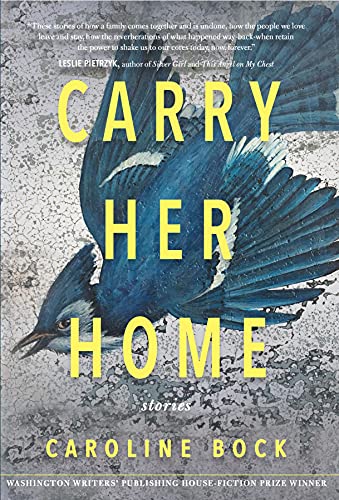 Caroline Bock’s hybrid collection, Carry Her Home, could be the collection to read in 2020 for several reasons, most notably because it focuses on family, home, and loss. As we have been confined to our own homes for the better part of 2020, we may be able to relate more closely to those themes than prior to the pandemic.

The theme of family is strong in this collection, and Bock describes the genre of this book as autobiographical fiction, even using her own name as the central character. Bock’s parents and others from her past, as well as actual places, also appear.

Structurally, the book is a collection of 47 stories of varying length that are sometimes connected, sometimes seemingly not. Bock takes many less traditional approaches in her writing, such as  shifting narrators among characters, even from those who have passed on, as well as shifting time and place. But taken as a whole, the stories weave together a glimpse of the fierce loyalty of a family holding love and loss simultaneously, bringing to mind John Keats’ theory of negative capability, that we are capable of existing in uncertainties, mysteries, or doubts.

When we first meet the central character, Caroline, as a 12-year-old girl in Part I, we learn she is growing up without a mother, who has suffered a stroke and is in the Hudson River Psychiatric Center. As the oldest, Caroline assumes the role of caring for her three younger siblings, as well as her “Pops.”

In “The Understanding,” the first and very short opening piece, we witness her coming to understand this fact, at least on the surface. Her father is leaving for a few days, and having given her $20 for emergencies, she understands that she is in charge now and also “that mothers and fathers leave even though they say they don’t want to.”

Part I also shows us some of the very happy times Caroline has with her family in the midst of the mother’s absence: piggyback rides with Pops in “Piggyback Ride,” a family camping trip in “Cranberry Lake,” and a family beach trip in “Jones Beach State Park.” “Louise’s Kids” shows the family visiting their mother in the hospital, dancing around her, asking her questions she should know the answer to but doesn’t due to her stroke. When Louise askes her husband who the children (her children) are, the four of them repeat (as one speaker), “We are Louise’s kids.”

Caroline’s parents, Louise Garofalo, and Murray Blech, meet as young adults who at a dance at the Palladium Ballroom in New York City. In “The Day After the Dance” in Part II, Louise invites Murray to her family home for Sunday dinner. This scene is both humorous and tense (as Caroline’s parents and brothers size up her suitor) and emphasizes the contrasts in Louise’s Italian American Catholic family and Murray’s Jewish family from the Bronx. Louise’s father and Murray engage in a verbal duel of one-up-man-ship of Italian versus Yiddish sayings.

In the midst of this battle, however, the more subtle, yet larger story seems to be one of bread, the comforting smells, its bounty, its ability to stave off hunger. The reader can almost smell the bread baking. During the Sunday dinner, Louise carries the loaves of bread, “the length of her arms, studded with sesame seeds, cradled in a wood tray, an offering.”

Later in the meal, Louise notices that Murray doesn’t have bread so gives him some. He says, “ I carefully tear off a piece the size of my palm, feel the weight of it in my hand and raise it to my lips, savor the smell. I chew slowly so no one will see my hunger.” Later in the book, as Murray is dying and has lost his appetite, he wishes for bread, “what he misses most” and for “solace once more in the symbol of the completeness of life, a decent New York bagel.”

Part III leaps forward to Pops dying at Caroline’s brother Matthew’s  home in “The Guest Room in Comer, Georgia.” Caroline is visiting as an adult with her own children and her husband Erik, a lepidopterist. Again, the negative capability is shown in Caroline’s thoughts about her own children: “The familiar panic rising—she had grown up without a mother, now how could she be one?” She wanted to make sure they knew she was there, to assure them “She wasn’t going to die, and all things die.”

In “Willie and Pop,” also in Part III, Pop (Murray) is left at home alone with Willie, the dog, while Matthew goes out for dinner. The door is left ajar, and a racoon sneaks in, setting off a terrific fight with Willie, who instinctively knows his job is to protect Pop. The scene is so descriptive, you can almost taste the blood.  “Willie’s jaw crushes down, breaks through the raccoon bone . . . He snarls and pounces and drops the dead raccoon. . . . He flings back his snout and howls, a keening into the night, reaped from the depths where he is still as much wolf as dog.”

Part IV is a series of “short shorts” or flash fiction. Some are connected to the characters we’ve already met, and some, such as “Wings” shift from traditional fiction to speculative fiction. Told in the first-person point of view, the narrator mentions a brother, but it isn’t clear that the narrator is Caroline referring to one of her brothers. The narrator tries on the wax wings her father made for her brother and is able to fly. The story then conflates with Icarus, also the brother, who flew too close to the sun, melting the wings, causing him to fall into the sea. The narrator ends the story by saying, “yet I knew the secret to the wings: fly alone, fly by the moon, fly as if you are in a dream.”

The theme of motherhood reappears in “Coda,” the last section of the book and, “Little Bear’s Apgar Scale” also embraces speculative fiction. Jane, an older pregnant woman, thinks she hears the baby speaking to her. “I’m hungry, do you hear me?” And later, after the birth, the baby speaks up: “Where exactly am I? And, by the way, the name is Ursula. Is there food here? Don’t you think I’d be hungry after all that?”

The last story in the book, “Are You Still There?” requires more than one reading. The speakers are unnamed, though it seems as though the adult Caroline is speaking by phone, which they both despise, to a younger Caroline. The older Caroline wants to assure her younger self that “you will go far,” “some memories will arise when least expected. Like a call in the night, this knowledge of your younger self will awaken you, and you will know it is not a dream. You will be able to talk then, even if you do not want to talk.” There is an echo, in this closing sentence, to the last sentence in the opening story: “that mothers and fathers leave even though they say they don’t want to.” The readers, as Caroline, are left holding both the awareness of grief, as well as the promise of hope.

Susan Bucci Mockler’s poetry has appeared in the Maximum Tilt Anthology, Pilgrimage Press, Crab Orchard Review, and Poet Lore,  among others. She is also the author of Noisy Souls, a chapbook of poetry and teaches at universities in Arlington, VA, and Washington, D.C.