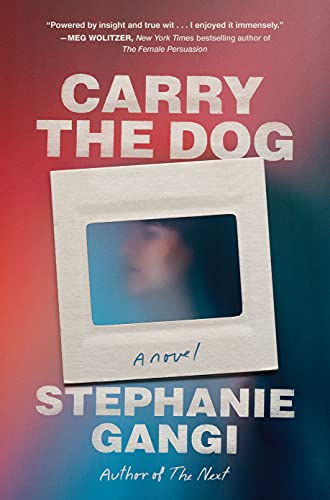 Stephanie Gangi’s magnificent second novel, Carry the Dog, captures the paralysis of the daily world so well that it’s a genuine surprise to realize that it’s set before the pandemic. Its inward-turning protagonist belongs so fully to the present moment that her presence a couple of years in the past is startling (though useful for plot purposes).

Berenice (Bea) Marx-Seager is twice-divorced from almost-rock-star Gary Going, yet still trapped in his orbit. Gary (among other people) wants Bea to open her photographer mother’s archives, preferably for profit, and let the public dig into her family’s scandalous and damaging past. If Hollywood is too sordid for the details, well, MOMA would love a crack at whatever those mysterious boxes in their obscure storage unit contain, if only Bea will say yes.

Bea, though, has survived mostly by saying nothing. Her mother was Miriam Marx, a legendary photographer of the 60s in the vein of Diane Arbus. Marx’s subjects were her children, stripped bare, posted for art: the Marx nudes. She was famous, for a few minutes; then she was dead, and returned to art and pop culture’s margins. One son vanished; the other died. Bea, the youngest child, fled from a destroyed family into Gary’s arms, prepared to live her life as a professional girlfriend.

Now Bea is almost sixty, living in a small New York apartment with her adopted sister Echo and a temporary dog on loan from the globe-trotting neighbours. She loves the attention of Hollywood producer Malcolm Bix, to whom Gary introduces her. Bix is all fast talk and seduction: “Once again, he’s both presumptuous and manly. I hate-love it. I’m starving.” MOMA curator Dr. Violet Yeun’s attractions are subtler but just as powerful: “I’m okay, but she looks amazing.” Yeun is cool, perfectly styled, and confident in ways that Bea can only simulate for short periods. She doesn’t offer money, only prestige, but she’s determined and persuasive, and all Bea has to do is say yes.

Carry the Dog (titled after Bea’s favorite of her mother’s photographs) is a dark, utterly convincing exploration of family trauma and individual survival. Bea’s father remarried, adopted a child, and now Bea’s almost-sister, young enough to be her daughter, lives with her in New York. Bea’s father Albert is dying, slowly, of ailments and old age, in Florida. There’s no money, but he might be the last living person with deep knowledge of what happened in the last terrible year of their family. Except, he has dementia. Except, he claims that the archives are a deep mystery to him. To him, the secrets are irritating details that have temporarily slipped his mind until he can slip away permanently.

Bea’s sense of her own childhood is warped by loss and trauma, and by her own youth. In late middle age, she’s unreliable through a mix of self-protection and paralysis. Money’s tight. Her aspirations as a writer keep shifting out of her grasp. If she could, she’d write the family history herself, but ten years in, all she has is a title, and Bix already came up with the same thing. Most of her attraction, she thinks, is by proxy: she is the gateway to her mother’s work; sometimes she’s the gateway to Gary’s attention. She herself is a work in progress: “How can I look like who I want to be? Aging but easy on the eyes. Sassy but not angry. Alone but not needy. Postmenopausal but not dried up. It’s hard to dress all that up, make it rock.”

Within all of this turmoil and hesitation, Bea is deeply sympathetic. She’s narratively compelling. The book’s pages turn because Bea needs company, even the spectral company of a reader, while she tries to survive each encounter. She needs emotional backup, as so many people do, but so few characters reveal. In fact, Bea often feels so real that it’s easy to forget that Carry the Dog is fiction; it feels deeply real, like a true memoir from a slightly alternate world just beyond our reach.