The Carrion Birds: A Novel 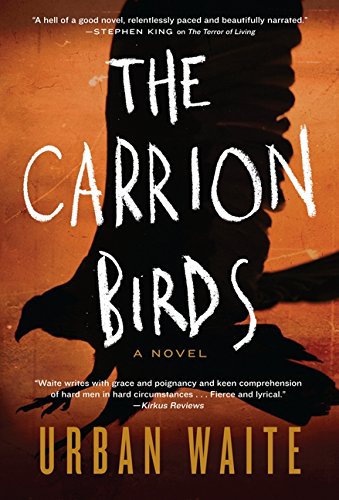 “. . . a lean and mean, modern-day noir western filled with complex characters and situations . . . a candidate for best crime book of 2013.”

A widower who has made tragic mistakes in the past, he’s got a few good things going for him: he’s calm, cool, and efficient under pressure, usually with a gun in his hand . . . a useful skill to have when you’re paid to stop people standing in your boss’s way.

But Ray wants to move on with his life and head home to Coronado, New Mexico, to his 12-year-old son, where he can make a new life far from his work of the last ten years:

“He’d decided as soon as Memo had told him about the job that it would be the last he would do. He was going home to Coronado. He was going home to see his son. The money he’d saved would get him through the first few years. He’d need to look for employment after that, perhaps even roughneck in the oilfields again, but until then it would be enough. This last job would help him with anything extra he needed.”

One last job will take him there. One last job. Three magic words that inevitably always seem to end in tragedy and bloodshed. All Ray has to do is steal a rival’s stash of money—simple, easy, clean.

But Ray knows there’s no such thing as simple, easy, or clean in the violent and bloody world he dwells in, and sure enough, the first day is a claustrophic mess when everything that could go wrong, does exactly that.

A shoot-out with two rivals from a Mexican cartel leaves one dead, murdered in cold-blood, and the other escaping into scrubland darkness. Ray’s partner-in-crime, Jim Sanchez, his boss’s bragging nephew gives chase, returning and claiming to have shot the fleeing man dead. But Ray’s intuition quickly kicks-in, giving him doubts to the younger man’s claims.

Sure enough, Ray soon discovers the shot rival is far from dead. He’s in hospital, critically wounded and guarded by a local cop. Left with no other option, Ray knows he must finish the job of killing the man before he has a chance to talk to the cops.

To add to Ray’s woes, the cartel wants not only answers, but also revenge. Big time revenge.

Short on time and with no one to trust, Ray must come up with a plan or Coronado’s newly-appointed lady sheriff, Edna Kelly, will have a vicious bloodbath on her hands. Worse, Ray’s cousin and ex-sheriff Tom Herrera could also be dragged into it. Years ago, Ray had helped destroy Tom’s career as sheriff, forcing his hand into the killing of a woman Ray believed was somehow involved in his wife’s death.

Can Ray ultimately take the path from perdition to redemption? Or will life deal him another card he wasn’t expecting?

In The Carrion Birds, Mr. Waite masterfully cuts away all fat in this relentlessly hypnotic tale of double-cross and vengeance. He has given us a lean and mean, modern-day noir western filled with complex characters and situations. The hauntingly dark and elegiac writing resonates throughout the book, reminiscent of Cormac McCarthy’s No Country for Old Men. Surely a candidate for best crime book of 2013.