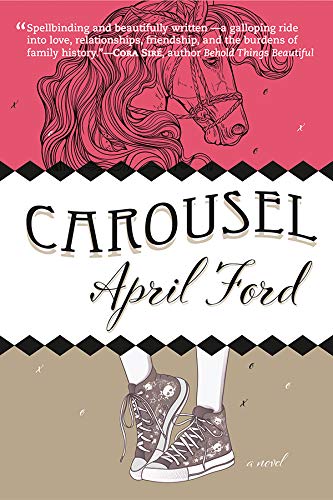 Winner of the 2020 International Book Award for LGBTQ Fiction, Carousel is the debut novel of April Ford and the story of a middle-aged woman caught between the buried emotional impact of her devastating childhood and life on the precipice of retirement with her beautiful true love, Estelle.

The story opens on a description of the world’s first galloping carousel, Le Galopant, (otherwise known as an antique merry-go-round)—magnificent horses frozen in place, yet still turning in circles for riders in an amusement park on a humid July evening in Montreal. Here we meet Margo, via her interior monologue, as she provides a short history of antique carousels, as she tries to photograph something interesting for her wife, and questions when was the last time she and Estelle had done something romantic together? Here Margot admits “After two-and-a-half decades with a woman whose gasp-worthy winsomeness and intelligence I had vowed to protect and nurture for the rest of our lives, I was bored.”

The carousel itself anchors the story that revolves around it—a glimpse into a vulnerable relationship in the wake of a 25-year history and the sudden discovery of essential emotional information from Margot’s past. This history, long ago stashed away, ignored and buried, becomes achingly meaningful as Margot is forced to look at it and acknowledge how it shaped who she is.

As the story opens, Margot photographs Le Galopant in a confused effort to do something nice for Estelle (whose career focus is the art of photography and who has been oddly obsessed with the ancient carousel). Here she meets a lanky young woman at 17 who captures her gaze and ultimately becomes the temptation dangling before her in her dissatisfied state of restlessness. Her name is Katy, and during this evening in July, Katy snaps a photo of Margot atop a galloping horse on the carousel, a photograph that Estelle would claim “in the twilight of our marriage, the most telling photograph of a person she had ever seen.” The rest of the story is the circuitous path toward understanding what that photograph might be and how it could be so telling.

At the outset, Estelle mirrors her partner’s unease, and has been meeting with a couple’s counsellor named Weinstock for the past five months, a counsellor who gives them a homework assignment—some kind of physical distancing over a vague timeline. As Margot goes through an evening at a fancy hotel by herself, the reader endures this temporary separation through her simmering discomfort and ambivalence of being forcefully separated from Estelle.

Constantly referring to Estelle as “my wife,” Margot perhaps unintentionally insinuates possession rather than simple relational identity. After its use over and over when Margo could simply say, “Estelle” instead of “my wife,” these words of ownership and societal definition betray an underlying defiance and insecurity inherent in Margot’s personality and her relationship with Estelle. Although it seems that Margot is the straying member of this partnership, and she controls the narrative, the reader is forced to guess at Estelle’s intentions.

“My mother had already gone mad by the time she gave birth to me,” begins Margot, remembering the secret of her life that she has kept from Estelle. As we learn about the remarkable events when Margot’s beautiful mother met her rich and impetuous father, as we learn about Margot’s neglected childhood, as she meanders through her own story, like the child she was when she first experienced it, the devastating emotional reality of her experiences build, one on top of the other. As Estelle discovers the truth of Margot’s origins, in unopened letters from Margot’s mother, Margot is forced to admit that her relationship with Estelle was based upon a lie. Of course, Margot would be having a crisis of the soul. One can only keep the lid on this kind of history for so long.

Throughout this journey, even as she is in the same room with Margot, Estelle comes in and out of focus, but in the snippets where we experience her, she is surprisingly faithful, loving and upbeat about their union; she works hard to unlock Margot’s secrets—secrets, that Estelle has discovered, stand firmly as obstacles to deeper intimacy.

The discovery of the truth that Margot had tried to escape through denial are teased out over the length of the novel, until finally, at Estelle’s insistence, both are in the same room with Margot’s institutionalized mother, Marguerite. It is here we feel the weight of witnessing a frail life almost at its end, having been wasted in a cloud of mental illness and alcoholism. From Margot’s POV, (the child returning to the devastation of her meaningless childhood), we experience the contempt of Marguerite’s altered personality, and understand that a parent can always injure her child.

Written by a deft storyteller, the novel features delightful snippets of description around every corner: “When I turned back, Estelle looked at me like a little girl stricken from having failed her spelling bee.” In describing her mother’s emerging “catastrophic flaw” Margot creates a moving picture of her own desperate discovery: “Now that it had emerged, like a swimmer finally succeeding in breaking the surface after being held under water by a bully, it was swiping and clawing at everything in its way . . .” And although the story must go down the wounding path of Margot’s childhood, the novel is light, its characters optimistic and lovable and the experience of reading it—delightful.