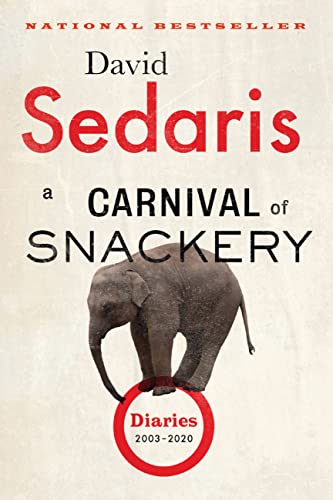 “wonderfully fun to dip into. Reading just a few pages is a perfect antidote to reading today’s news. Humor like this is more than a tasty snack; it’s a very satisfying meal.”

In A Carnival of Snackery, David Sedaris shares excerpts from his diaries, the raw material he later shapes into essays, books, and talks. Not surprisingly, the same droll humor and distinctive voice permeates the pages as is found in the “refined” pieces. This is a follow-up to his first selection of diary pages, Theft by Finding. Like in the earlier book, much of the humor comes from encounters while Sedaris is on book tour, either with drivers, on an airplane, or exchanging words with people at signings. What holds it all together is Sedaris’ sharp eye, the delight he takes in both the ordinary and the absurd. He describes what catches his eye and ear in the introduction:

“If a number of these entries seem overproduced, it’s because they are. When something especially interesting happens—a monkey is spotted at the Cracker Barrel, a woman tells me that her cousin had his arms chewed off by pigs in Mexico—I take extra care when writing it up in my diary, knowing I’ll likely be reading it onstage. These entries, by and large, have taglines. They wave little flags—Hey, look at me! Many of the ones that work well in front of an audience I wound up cutting just because they seemed too self-conscious, too eager to please. Others I kept because, come on, his arms chewed off by pigs?”

While the fun often comes from others, simply noted and appreciated by Sedaris, it also comes from his reactions. When a woman at a book-signing tells him she’s donating bone marrow to a stranger simply out of altruism, Sedaris wants to know if she can write off the donation. As he notes in the diary entry that day:

“You get a break if you have children or buy an SUV, but save the life of a complete stranger and you can’t even deduct the cost of your face masks.”

The diary charts the Bush presidency, followed by Obama’s and Trump’s. The pandemic sneaks in at the end as Sedaris travels less (though still much more than most people in the first year of shut-down). Through it all, Sedaris stays the same, though he sneaks in a complaint about aging now and then. He sums up his first year of Covid-19 well aware of how lucky he’s been:

“My 2020 wasn’t nearly as bad as most people’s. Yes, my tours were canceled, but at least I wasn’t stuck in a studio apartment with three children. I had space. The only person in my family to get the coronavirus was Dad, who not only survived without being hospitalized—and at age ninety-seven!—but shed ten pounds. ‘No fair!’ we all cried.”

At the end of the book, there’s a nod to the beginning of identity politics we’re all thrust into now, making the reader eager for what the next batch of diaries holds.

“There are so many things I don’t understand now. Our constant need to rebrand, for instance. Someone politely referred to me as ‘queer’ not long ago, and I was like, Oh no, you don’t. I was queer in the 1970s, and that was enough for me. . . . I also don’t get holding people who lived dozens of years ago—much less hundreds of years ago—to the moral standards of today. Can we really condemn Dolley Madison for not supporting trans rights?”

Carnival of Snackery is wonderfully fun to dip into. Reading just a few pages are a perfect antidote to reading today’s news. Humor like this is more than a tasty snack; it’s a very satisfying meal.