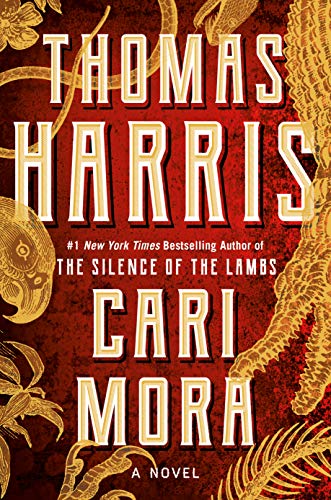 “Thomas Harris has earned his reputation as a terrific author of crime thrillers, but Cari Mora is not a terrific novel.”

Thomas Harris is an icon in the world of crime thrillers. His novel Silence of the Lambs is a classic in the genre, and his antagonist Dr. Hannibal Lecter is one of the best-known characters in modern popular fiction.

More than a dozen years after the publication of his last novel, Hannibal Rising (2006), Harris is back with a new standalone thriller, Cari Mora.

The premise of Cari Mora is one that’s sure to grab your attention. The late Pablo Escobar, the Colombian drug lord said to have been the wealthiest criminal in history, apparently hid $25 million in cartel gold beneath a mansion on the Miami Beach waterfront. Two rival gangs think they’ve found the mansion, and one is frantically digging up the basement while the other watches from a boat offshore, waiting for an opening to take over the search.

Cari Mora, a young Colombian woman in Miami on Temporary Protected Status, has been looking after the mansion for its owners while it’s rented out to various film production crews. This latest bunch, though, has set off alarm bells in her head. Led by Hans-Peter Schneider, an obvious psychopath, they have the look and feel of hard case criminals, and their feverish destruction of the basement makes it obvious they’re not filmmakers.

When a large vault is discovered up against the foundation under the patio, the war to salvage the gold hits high gear. Hans-Peter must fight for control of the site against the second gang, staffed from the legendary Ten Bells school of pickpockets in Barranquilla, Colombia.

Cari Mora must decide whether to align herself with the men from Ten Bells or to check out of the action altogether.

While the premise of this novel is enticing, the story falls far short of delivering the goods. Circumscribed by the mansion, the vault, and the men circling around it, the plot goes almost nowhere. Harris alternates between multiple points of view, and it takes a while to separate the characters into their respective factions as they jockey for control of the vault.

Meanwhile, the narrative is a nonstop recitation of violence. The characters in this novel have absolutely no respect for the human body, and the reader is forced to work through all the various ways in which people can be shot, skewered, dismembered, and, yes, eaten.

Cari Mora is an interesting character, and it’s likely for this reason that Harris decided to name the novel after her. A former child solder in FARC, the Fuerzas Armadas Revolucionarias de Colombia, she’s a survivor with skills that could see her through the mayhem. Her wish, however, is merely to have a house in Miami to call her own, where no one will try to harm her, and to become a veterinarian.

However, we don’t get enough of her to justify the marquee billing. True to his nature, Harris devotes a large share of the spotlight to Henri-Peter, a latter-day Hannibal Lecter whose psychopathy attempts to be even more revolting and repulsive. Readers who enjoy exploring the depths of human depravity will be pleased, but the rest of us will be left wishing for more Cari and less carnage.

Detective Terry Robles of Miami PD Homicide is another intriguing figure with whom Harris could have done much more. He and Cari are examples of the author’s genius in character development, and one would have wished that the novel had included more of Robles in its structure and not quite as much of the various bad guys.

As for Miami itself, while Harris in his Acknowledgments calls it “savory and beautiful, an intensely American city,” the fact is that it comes off as a place of nightmares that any sane person, after reading this story, would avoid.

Populated by lawless, violent people, its beaches littered with garbage and wounded birds, Harris’s setting is like a landscape painted by Hieronymus Bosch.

What’s the best he can say for it? As Cari hurries ashore in Biscayne Bay to rescue an osprey tangled in fishing line, “she waded toward the wreck and jetsam [that] looked like her life, or almost like her life—[but] she did not see any human parts in the debris.”

For once. What a relief.

Thomas Harris has earned his reputation as a terrific author of crime thrillers, but Cari Mora is not a terrific novel. Whatever it was he was trying to accomplish after more than 12 years of silence, he has unfortunately fallen short.