The Captive: A Novel 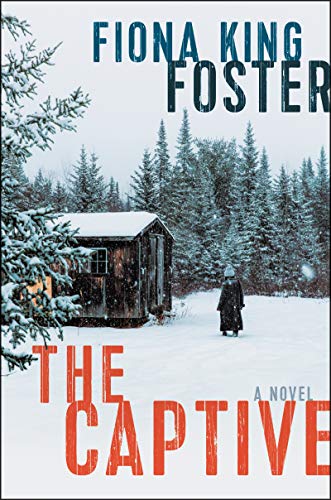 An undercurrent of tension wafts off the pages of this book from the start. It's subtle, but it's there. Readers know right away something is going to happen. Something bad. Something dangerous.

A warrant has been issued for a federal fugitive on the run with a bounty on his head. His name is Stephen Cawley, and he's no stranger to Brooke:

"Milo didn't ask why she'd started locking the door after all these years, its mechanism so seized up from disuse that she'd had to drench it in oil before it would slide, just as he didn't ask what had possessed her to sell their last horse so suddenly . . .

"Milo had learned long ago there were things Brooke kept to herself, and he seemed content to trust her."

Brooke is on her way to the house after checking the cranberry bogs when she sees him:

". . .In the dimness of the shed was Stephen Cawley, fair-haired, blue-eyed, a scar from his lip to his chin. He was turning toward her. She saw recognition settle on him."

She'd half expected him to show up, so reacts before he can.

". . . Stephen Cawley opened his mouth to speak and Brooke lunged, grabbed the rinsing pole from the ground, slammed the doors, and shoved the pole through both handles, trapping him inside. A heartbeat later, the shed shook as Cawley pounded the doors from within, shouting something Brooke couldn't make out. The pole held."

Cawley breaks out of the shed board by board, plank by plank, but Brooke is ready for him.

"She felt the axe pivot in her hands, blunt end forward. A barely conscious choice, mercy sneaking in where it wasn't wanted.

Instead of killing him, she beats him into submission, a beating the author cleverly describes in action packed detail minus the blood and gore. She leaves that up to the imagination of readers.

". . . Brooke looked down at Stephen Cawley, laying unconscious, bound at the wrists and ankles, where she'd dragged him to an inner room of her rinsing shed. . . .  No clue to how Cawley had gotten here. Under his body stink, Brooke could detect neither horse nor diesel."

The federal marshal was offering five thousand dollars for the safe delivery of Cawley to the federal authorities, money she could use to flee with her family from the consequences of the past.

Despite Cawley's injuries, he could still walk, so Brooke hitched him to a rope, then gathered her family for the treacherous trek through the wilderness to the distant town of Buxton to claim the reward.

"Milo led the way up the driveway toward the road. . . . Brooke walked last, with the lead rope looped in her left hand, the rifle slung on her right, and Cawley in front of her, where she could see him."

And so begins a terrifying journey at the onset of winter during which fear is a constant companion. Fear of Cawley and fear of retribution from members of the Cawley family.

Stephen never gives up his indefatigable attempts to escape nor does Brooke give up her mission to bring him to justice and collect the reward:

"The stallion's hoofprints ended half a mile in, at the swamp. A line of bent and leaning reeds showed where Cawley had ridden into reflectionless black water, where Brooke could not follow. . . . She would have to circuit the swamp to find Cawley's exit point, and all the while she would be ignorant of his position, whether he'd waded clear through to the other side or circled back to come at her from behind . . ."

Strong women, for good or for bad, grace the pages of some of the best books being published today. High praise to Fiona King Foster for her depiction of Brooke Holland, a woman who faces danger and the consequences of a violent past with determination and strength.