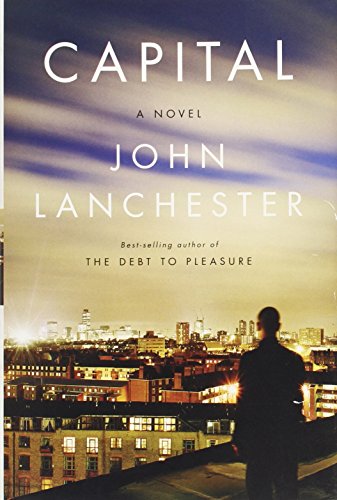 “. . . a meaty slab of literary realism in the tradition of Charles Dickens, Honoré de Balzac, and Émile Zola . . .”

The short prologue begins by setting the scene on Pepys Road, South London, United Kingdom. During first light, a hoodie-wearing figure takes pictures of the mansions. Why is he taking pictures? What is his agenda?

The architecture style and the occupants, move forward in a rather staid historical progression until a V-2 rocket hit two houses in 1944. This brings the reader into the present day and the numerous characters involved in this small stretch of real estate.

The novel then traces events from December 2007 to November 2008, with the global economic meltdown and its consequences acting as a backdrop to the human stories interconnecting the various actors.

The novel follows numerous people of every economic, political, and social background. There is Roger Yount, the genial, albeit inept, merchant banker working at Pinker Lloyd, his shopaholic wife Arabella, and their two young children.

There is Ahmed Kamal, the stereotypical Pakistani convenience store owner, his lovely wife Rohinka, their children, and Ahmed's brothers of varying degrees of religious devotion. Petunia Howe is an elderly woman who lives alone and acts as a symbolic anchor to the past, a past that becomes more and more like the faded mythology of nostalgia, a misremembered bulwark against the social and demographic changes effecting Pepys Road and Britain at large.

We meet outliers, non-members of the great amorphous middle classes. These include the celebrity artist Smitty, a Banksy-like artist mulling over the aesthetics of anonymity and public space. Smitty is also Petunia's grandson. There is Freddy Kamo, a Senegalese soccer prodigy, recently signed to a premier football team and catapulted into the ranks of the international sports nouveau riche. On the other end of the spectrum is Quentina Mkfesi, a parking warden, outfitted in a ridiculous uniform illegally working in London.

Against this backdrop, Pepys Road gets an unwelcome visit in the form of postcards sent anonymously. With photos of their houses, residents read the vague and ominous threat, “We Want You Have.” This sends a jolt of outrage and fear through the neighborhood. Just when the characters get used to a comfortable routine, another postcard arrives. When the threat level increases with a blog and vulgar graffiti, the police get involved.

Mr. Lanchester weaves a grand tapestry of London with the confidence of a literary master. He gives the reader a novel built like a socioeconomic layer cake, a meaty slab of literary realism in the tradition of Charles Dickens, Honoré de Balzac, and Émile Zola.

While not a novel that takes chances with the form—Mr. Lanchester is no David Foster Wallace or Thomas Pynchon—it does offer a realistic depiction of people and events during a very specific time. In this case, the Great Recession.

The title is no clever pun either. It calls attention to London's past and future. Unlike the United States, London is the political, financial, and cultural center of the nation. In the past, the economist Karl Marx would write Capital (the German title is Das Kapital) where it would be published in 1867. While Marx wrote his damning indictment of nineteenth century industrialization, present day London set forth a new trend, beginning with Margaret Thatcher's rule, of adapting the British economy from manufacturing to financials.

But Mr. Lanchester refuses to take sides, at least explicitly, with this novel. His mission is to simply observe. With anti-banker sentiment at an all-time high, he somehow manages to create a sympathetic character in Roger Yount.

In the end, the Younts, the Kamals, the Howes, the Kamos, Smitty, and the numerous other minor characters are turned into realistic human beings. The reader witnesses the hubris, the obliviousness, the pride, and weakness inherent in every character.

For the novelist, the political can be used as a mallet, something to pound the reader into submission, getting him or her to come around to the novelist's point of view. Mr. Lanchester chooses to use a scalpel for tender and humorous observations.

Mr. Lanchester has written a great novel about the Great Recession from the perspective of a South London street. It is a literary monument to the obsessions, fears, and foibles of everyone when the global economy collapsed around them.