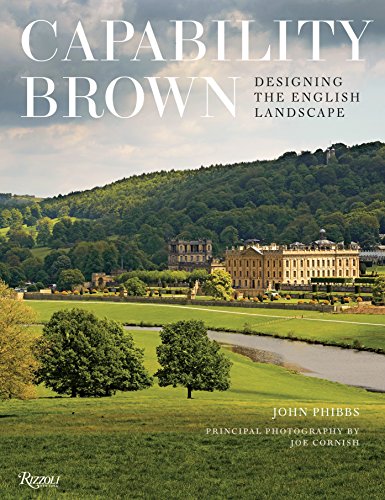 This year marks the 300th anniversary of the birth of Lancelot Brown (1716–1783). Better known as “Capability” Brown, he was one of the cutting edge English landscape designers of the 18th century. Today he is regarded as England’s finest gardener. His designs are as quintessentially English as the novels of Jane Austen or the paintings of John Constable. One contemporary German admirer called him the “Shakespeare of gardening.”

To celebrate, British tourist boards and a slew of country houses with extant Brown landscapes have staged a multitude of events focused on Brown’s work, and publishers are releasing new books about his life.

Capability Brown: Designing the English Landscape by John Phibbs is one of these new books. Focusing on Brown’s country house garden designs, Phibbs discusses 15 properties, focusing on the highlights of a career that began when Brown was a boy of 14 working in the garden of the great house in Kirkharle Hall near where he was born, and continued until his death.

Brown earned his curious sobriquet “Capability” because he would tell his wealthy, landowning clients that their passé Baroque formal gardens, marshy lowlands, or featureless rolling land on their estates had great “capability” for improvement. The equivalent today would be to give the nickname “Potential” to a designer who sees possibilities in a difficult property.

During the span of his 42-year career, experts estimate that Brown improved, or as he liked to say, altered at least half a million acres of land. He was paid well for his efforts. During the last decade of his life, he was earning the equivalent in today’s dollars of $6.2 million a year. At that time the average laborer made about five dollars a day. His business success came in part from offering a full design and build service. If his projects came in below budget, he refunded the surplus.

He was personable and generous by nature and became close friends with many of his clients. In 1764 at age 48 he was given a Royal Appointment. In addition to his titled and landed clients, he numbered among his friends statesmen such as William Pitt the elder as well as artists and actors. The actor-manager David Garrick wrote of him, “I envy his genius, yet doat on ye Man.”

To say he “altered” land is not an exaggeration. He literally moved mountains, or created new ones if a rise in the land would improve the view. He turned 17th century canals into natural looking, rushing streams and excavated ponds or marshy areas, turning them into lakes. If an existing lake was symmetric in form, he made it irregular. At Milton Abbey in Dorset, he tore down the village of Middleton, which as Phibbs writes, “disturbed Lord Milton’s peace,” and squeezed a new village called Milton Abbas into a wooded valley out of sight of the house.

Brown reveled in the infinite shades of green and used trees to help create his perfect landscape pictures. In the process, he moved large specimens, planted forests and groves, and cut down trees to frame a view or open a vista. He wrote that there was, “so much Beauty depending on the size of the trees and the colour of their leaves to produce the effect of light and shade.”

The results of all this earthmoving, stream rerouting, and tree planting (in an age when it was all done by hand), is a landscape that looks like nature, but nature perfected. As Phibbs explains, “Brown had the uncanny ability to transform the countryside, and yet leave no mark of his presence upon it.”

Capability Brown’s work influenced gardeners throughout the western world. In Europe, wealthy landowners imitated Brown’s style when they created landscaped parkland on their estates, referring to them as their Jardin Anglais or Englische Garten. Notable followers included Catherine the Great in Russia and Thomas Jefferson in America.

When touring England, Jefferson visited several country homes graced with landscapes designed by Brown, including Stowe, Blenheim, and Moor Park. Back home at Monticello, his mountaintop home in Charlottesville, Virginia, he adapted the English landscape style with its open spaces and undulating fields dotted with the occasional massive oak or beech to the hot, humid Virginia climate. He wrote, "But under the constant, beaming, almost vertical sun of Virginia, shade is our Elysium." Instead of open meadows, he created a grove of tall trees limbed up, ”so as that their tops shall unite and yield dense shade. A wood, so open below, will have the appearance of open grounds.”

This book, which focuses on Brown’s oeuvre rather than his life and character, is divided into sections that cover the early years when Brown was a young designer working on grand country properties such as Stowe with his mentor William Kent, the middle years (Petworth House, Burghley House, Chatsworth, and Blenheim Palace), the prime years (notably Milton Abbey), and the late works spanning an 11-year period from 1772 until 1783.

For each house featured in the book, Phibbs provides an essay giving great detail about Brown’s design and the challenges he overcame to create each masterful landscape. Phibbs is a world authority on Capability Brown and a recognized garden historian with more than 30 years’ experience managing and restoring historic landscapes, so he is a worthy guide. Unfortunately, his writing style tends to be academic. He does have a wry sense of humor, and the text is rich with detail, but for some readers the detail may be more than they want to know.

Too many long, convoluted sentences make the reading heavy going. For example in a passage about the design at Burghley House, he writes, “The reticulated landscape of the ferme ornée, consisting of a number of discrete components, was to be replaced by a graduated one, in which each component would blend into the next, becoming insensibly wilder as one moved away from the house.”

Fascinating reproductions of rarely seen archival drawings of Brown’s landscape plans shed light on Brown’s thinking and designs, enhancing the book. In one case there is a photograph of a bridge accompanied by the original design drawing of the bridge done by James Paine. Seeing the two side by side is a treat.

Accompanying the essays are sumptuous photographs. Joe Cornish is the excellent principal photographer, but the book includes the work of fine other fine photographers, including Andrew Lawson. These images celebrate the soft English light while capturing the natural, parkland beauty of Brown’s designs.

The double-page spreads in particular have a painterly feel, evoking the work of 17th century romantic landscape painters such Claude Lorrain and Nicolas Poussin. Some have an epic quality with dramatic, lowering, thunder-cloud–filled skies, others feature the pale blue skies of a pretty English summer day. The photographs are a fitting tribute to the man who gardened on a grand scale.

Phipps writes that Capability Brown, “liked to call himself a ‘place-maker,’ but was more often described as a magician. That sense of magic and mystery persists as we try to understand Brown today.” This book certainly captures the magic.