The Candy House: A Novel (Visit from the Goon Squad, 2) 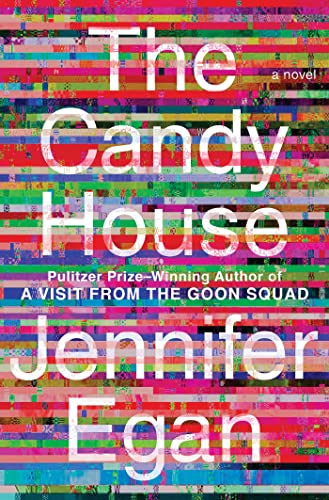 Jennifer Egan is the prodigiously talented author of seven works of fiction, including the Pulitzer Prize-winning A Visit from the Goon Squad (2011). That book was a set of 13 interrelated stories, all connected to the character of Bernie Salazar. In her present effort, The Candy House, Egan extends that reach and provides a kind of sequel with the same structural principle and some of the same characters. It is a stand-alone story and can be read as such. But the reappearance of such figures as Salazar, his family, and other previous players lends in-depth continuity to the tale she tells.

It wouldn’t be surprising if she has a third such effort in mind and on the drawing board, since the kaleidoscopic nature of this construct permits an almost infinite expansiveness and variegated styles. This is a very modern novel, yet in the great tradition of those 19th century authors who took on the whole of, say, Paris or London. There seems no easy outside limit to what Egan may achieve.

Although in Manhattan Beach (2017) the author deployed the techniques of historical fiction and confined herself to an omniscient point of view, here she ranges forward to a not-too-distant future, with a certain amount of “science-fiction” or prophecy deployed.

Egan’s canvas is a large one, and her narrative procedures dazzlingly inventive, with cross-cuts and quick-cuts and many forms of rhetoric, with multiple protagonists and modes. There’s a chapter (“Lulu the Spy, 2032”) written as 53 double-column entries, and a chapter (“See Below”) composed of emails with a secondary plot.

The action of the novel goes as far back as “The Goon Squad,” starting in 1992, and the retrieval of memories from the sixties and the seventies forms part of the ongoing action as well. Indeed, a governing principle of The Candy House is that the past is always with us and can be (by newly invented machinery) retrieved.

The book’s opening sequence follows Belvedere “Bix” Bouton, a Black entrepreneur and visionary. He has become enormously rich and instantly recognizable, therefore he wears a disguise. “His original Vision—that luminous sphere of interconnection he’d conceived during the East Seventh Street years—had become the business of Mandala: implementing it, expanding it, finessing it, monetizing it, selling it, sustaining it, refreshing it, ubiquitizing it, standardizing it, and globalizing it. Soon that work would be complete.” But Bix—though often referred to and in some sense omnipresent—is only a minor player on the novel’s stage. What he invented endures.

Authenticity is a central issue throughout; the characters change jobs and locales and try on styles for size. Early on, from the character of Alfred: “‘Authenticity’ he said, unfurling the word like an ancient, holy scroll. He almost never uttered it, lest overuse diminish its power.” As another central figure, Rebecca Amari, puts it: “Why study authenticity if not to seek it—try to wring some last truth from that word before it’s so leached of meaning that it becomes a word casing: a shell without a bullet, a term that can be used only inside quotation marks?”

Marriages work or fail to; love affairs begin and end; careers succeed or fail. Children are hunted and haunted by their parents, parents by their children. Some are obsessed by numbers, others by music or junk transformed to art. There are addicts and convicts as well as tennis-playing mothers in a country club. But always there’s the hunt for satisfaction, if satisfaction be defined as being at ease in the contours of self. The multiple narratives all are concerned with the nature of identity in a shape-shifting world. “Own your Unconsciousness”—the memory-bank that Bix has invented, and which paying customers can access—has spiraled out of control.

This is a lot to digest. And at times—particularly, for this reader, in the future-facing chapters—there’s a sense of strained inventiveness, as if the envelope gets stuffed too full: “If they achieve such numbers that their alternate network rivals the dominance of the one from which we derive our data—if they, in effect, secede undetected from our society and form a new one, with a separate economy and currency and even language (all the while appearing, online, still to be their old selves)—new counters will soon arise within their ranks to count their data.”

But even such thick-tongued diction is appropriate to the speaker, and Egan’s ear has perfect pitch. When her characters talk—professors and computer programmers and street kids and gold-diggers—what they say sounds resoundingly true. She can imitate the language of a teenager or movie star or special op or music mogul with authority, weaving a tapestry of multi-colored strands. It’s as if the traditional novel has been broken open and supplanted by a set of fragments and interrupted focus in the modern mode.

Here are a few samples of Egan’s splendid prose: “Her face, initially shuttered, springs open in welcome, and she promises to try.” Or, “He controlled what we saw of his life, and our blindfolded vision of it seemed to bring him relief.” Or, “College friends drifted away at high speed, and Alfred was relieved to be rid of them and bereft without them.” Or, as Salazar writes, “Tongue-in-cheek nostalgia is merely the portal, the candy house, if you will, through which we hope to lure in a new generation and bewitch them.” Or, most simply, “There are still some mysteries left.”

We read hundreds of perfectly formed phrases and perceptions, and the overall effect is, as suggested, collective. The narrative through-line is difficult to follow, and the story’s resolution remains in some sense open-ended. But the book’s concluding chapter seems nonetheless a hopeful one, as if our human consciousness may well survive its regulation—as if alertness is, in and of itself, a survival technique. And if alertness is one mark of a survivor, the novels of Jennifer Egan are likely to live long.