Can Journalism Be Saved?: Rediscovering America's Appetite for News 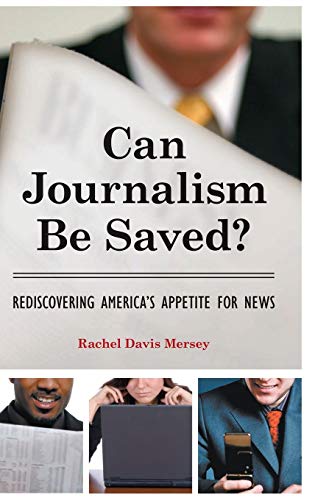 We can carve journalism into two distinct cuts: the tough, chewy chuck of reporting and recording events and facts, and the sirloin of narrative. In the kitchen of the daily news business, one way to extend the sirloin is to add new ingredients and angles over time. However, as journalists keep stringing out the story’s line of thought, its true flavor (and factual basis) gets thinner and thinner.

The narrative of the so-called death of journalism is a perfect example of this process. Rivaling that of General Franco’s, journalism’s demise has been so thoroughly sold to the public that Congressional hearings were held in 2009 to hash out the possibility of taxpayers subsidizing journalistic enterprises in the same way they have GM and Chrysler.

All of which makes one wonder how corporate ownership of news outlets got confused with the process of journalism. If some foxy media owners are now declaring that the nation must rescue the likes of the Tribune Company (dying) or the Rocky Mountain News (already deceased), no one seems to suggest we must throw a life preserver to the journalists themselves—because we know their craft can be practiced without a city room or TV studio and that the Internet makes low-cost distribution possible.

Rachel Davis Mersey, who teaches at Northwestern’s Medill School of Journalism, (considered, along with Columbia University’s journalism school, as one of the bastions of preparation for the profession) has considered all this in Can Journalism Be Saved?—Rediscovering America’s Appetite for News. Happily, she is no apologist for the mistakes that many news organizations have made as demographics and the Internet decimate their circulation and viewership. Instead, she believes news organizations must descend their lofty perch and ask the same question anyone trying to make an honest buck does: “What business are we really in?”

Though only 163 pages, this is no light-hearted jaunt. Davis Mersey’s work is scholarly, dry, and not the journalistic construct one might see in, say, the New York Post. She doesn’t share her thesis with us until page 93, but it’s a decent reward for the reader’s patience: News organizations are in the business of creating and curating content for a specific audience.

Contrast that with what most news executives believe—namely, that they’re in the news business and that “real” journalism is an indispensible product for which people must be convinced.

But who or what is a serious producer of news? And what, pray tell, is the public interest? The legacy media’s answers have been, at best, patriarchal bordering on patronizing. It’s the eat-your-spinach-it’s-good-for-you school of news production, better known as the “social responsibility” model.

Davis Mersey contrasts this with an identity-based model that doesn’t require dumbing down journalism for people. Instead, it is about serving individuals so well that they are getting what they want and what the journalist thinks they need. This is useful blasphemy and one that should be taken to heart by the dailies and TV news shows that are still standing at this point in the industry’s restructuring.

Thinking little about your audience, as many publishers and editors at now-buried publications have been guilty of, doesn’t really provide much of a soapbox on which to stand. A new form, production or distribution of your product is created, and you become a commodity—easily discounted and, if no corrective action is taken, left for dead.

And though many journalists have been victims of upper-management myopia, others have been complicit. Convinced of their power as agenda setters, Davis Mersey bluntly states, “they believe in telling people who are not as smart as they, their readers, what is the important news of the day. It is an elitist perspective . . .”

Ironically, it is Google that seems to be looking at the production of news in fresher ways than the Columbia J-School crowd, which is populated mainly by the media’s old guard. It is these same people who are still rubbing their eyes, trying to figure out what happened to their business models. After all, reporters and editors were supposed to be the people in the know, the ones who understood how the world worked and explained it to us.

Entrepreneurship and technology—the printing press, radio, television, and the Internet—always upset the apple cart, and suddenly the smartest people in the room (like those monks with their styluses in 500 A.C.E.) don’t seem quite so prescient.