Can Academics Change the World?: An Israeli Anthropologist's Testimony on the Rise and Fall of a Protest Movement on Campus (EASA Series) 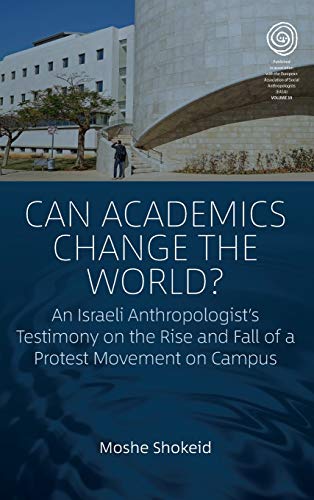 “for [Shokheid] the path is to listen deeply to the advocates—Israeli and Palestinian alike—and work trenchantly toward the radical center. That means no one is off the hook in the conversation. His is a call for a radical democracy.”

How to categorize this deep meditation on academics, activism, and their ability to change the world for the better? Moshe Shokeid tries on a variety of labels: memoir, auto-ethnography, anthropological autobiography. To this we might add “autobiographical occasion,” a concept developed by sociologist Robert Zussman. The idea is that there are times in our lives that demand our testimony; they require an accounting. While these may be tectonic events or processes that forever shape us, they are larger than us. At their grandest, autobiographical occasions rise above personal narrative into the realm of the public imagination and discourse.

This book fits with a broader movement of public intellectuals who have escaped academia’s ivory tower, and brought their considerable theoretical, analytical, and communicative firepower to bear on real-world problems in ways that engage broadly. Public intellectuals, therefore, have the opportunity to influence both policy and public opinion.

Shokeid begins by providing a short and incisive overview of Israeli-Palestinian relations. Three nodal events punctuate this history. First, the Six-Day War waged in 1967 against Israel by Arab neighbors marks an implausible if decisive victory against a far superior force. It also expands Israel’s territorial holdings and cements its place on the geopolitical map.

Second, the 1987 intifada (uprising) underscored the cost of Palestinian marginalization and poverty while simultaneously exploding the myth of a benevolent occupation. It revealed, rather, a traditional colonial relationship marked by myriad exploitations and political exclusion. It also sets the stage for groups like Hamas to move in and radicalize through mosques (though the Palestinian Liberation Organization was the de facto formal political representative of Palestinians).

On the one hand, then, the emergence of a political-religious ideology took hold of the Palestinian statehood movement. On the other, the Israeli political response was to pivot right. Thus, modern political contours that endure today were set into place, along with the establishment of an apartheid-like arrangement with both sides becoming more hardened and radicalized over time.

Third, the 1993 Oslo Accords set the path toward a two-state solution; falls apart in 2000; and paves the way for the second intifada in that same year. The result? Yet further hardened polarization.

Enter the academics. It should be noted that Israeli universities are all quite new and there was no history of organized activism. Indeed, Shokeid was professionally socialized in a world that fetishized the ivory tower academic world, looked down upon applied research, and actively scorned anything that smacked of activism.

And so we follow Shokeid’s activist awakening during the first intifada. In connecting the dots, he well understood that academics carry particular gravitas in public discourse and had institutional power if they chose to organize and use it. Colleagues at Tel Aviv University (TAU) formed AD KAN (No More!).* They proceeded to do what academics do, hold a couple of conferences (inviting Palestinian participants to share their stories and analyses) and shape a platform. Their goal was to protest and oppose the occupation of the West Bank and Gaza and managed to remain a coherent group from 1987–1995.

The book, then, traces the formation of the group and its impressive wealth of activities (conferences, workshops, speakers, protests, and the list goes on). In the pre-internet world, getting media coverage was critical. It was so unusual at the time to have academics in active, organized protests that the media actually took an interest!

As we move through the narrative, Shokeid’s own ambivalences and disappointments surface. For instance, he contemplates the value of becoming an academic émigré or the horror of attending a peaceful protest to only have it violently dispersed by the police. He notes, “We were shocked and humiliated at how our national guardians defending ‘peace and order’ in an allegedly democratic society brutally mistreated peaceful citizens.” His sentiment rings all too familiar in America’s current political miasma.

As we see, the forces of a right-wing and increasingly totalitarian state become entrenched. The election of Prime Minister Netanyahu in 1996 sealed the deal, and AD KAN fell apart as a protest movement in support of the Palestinian cause. As Shokeid observes, academics have an uncanny way of sitting on the fence when their voices and actions are most needed. Unstated is the entailment that silence = complicity.

Shokeid underscores the quixotic nature of his American academic brothers and sisters who are quick to demand “justice” without any further action. For he shrewdly observes that such railing merely emboldens the extremists on both sides of the problem. Indeed, for him the path is to listen deeply to the advocates—Israeli and Palestinian alike—and work trenchantly toward the radical center. That means no one is off the hook in the conversation. His is a call for a radical democracy.

In other words, both Palestinians and Israelis are deeply and profoundly damaged by the occupation of Palestinian territory with apartheid-like conditions. The healing process cannot be found in further polarization, but only in compromise and reconciliation.

Today, Shokeid finds that while there are numerous, highly committed protest groups, their lack of any unified organization deflates their efforts. Shokeid closes with a sobering meditation that goes back to the illusive radical center. He states, “Why do ‘we’ enlightened Israelis, academics in particular, remain paralyzed to confront a minority of aggressive messianic dreamers who have hijacked our national political and moral compass?” He counterbalances that thought with: “One cannot exonerate the Palestinians who are as divided—socially, culturally, politically (Fatah, Hamas, Islamic Jihad, etc.)—as the Israelis are, if not far more, deliberating as they do about the options, targets, and tactics of reaching a solution to save their people from continuing suffering.” One can only conclude that internal divisions on both sides coupled with the movement to political-ideological extremes leaves an utterly intractable situation.

Shokeid ends with deep reflection: “As much as I have enjoyed my ethnographic ventures, I could never remain a reserved observer, free of deep personal concerns about the changing sociopolitical circumstances of the people I studied . . . my Israeli identity never allowed me to maintain a moral distance from the broader social-political context of Israeli society.” This is a mourning for a future lost, but not one where he stayed on the sideline as a distanced observer. For those of us who do applied anthropology, it is the realization that despite our best efforts, our most difficult and vexing task is to change the world for the better.

*Not to be confused with the contemporary Zionist right-wing group, Ad Kan, which infiltrates what it perceives to be groups that undermine the Israeli state and sovereignty.