Campaign of the Century: Kennedy, Nixon, and the Election of 1960 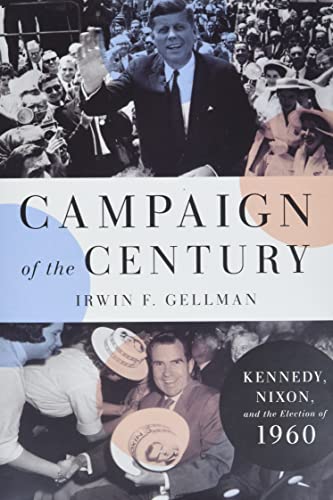 “Gellman’s steadfast refusal to psychoanalyze the most complex and confounding president of the 20th century—a tendency most writers are helpless to resist—is both surprising and surprisingly refreshing, and that alone would make Campaign of the Century essential reading.”

A handful of 20th century US presidential elections stand out as the most memorable, among them the bitter three-way slugfest of 1912, the Depression-era do-or-die battle of 1932, the upset-for-the-ages of 1948, and John F. Kennedy and Richard M. Nixon’s still-disputed squeaker of 1960, dubbed “The Campaign of the Century” in Irwin F. Gellman’s exhaustively researched and lucidly written new book.

Gellman emphatically positions this book—third in an eye-opening series on Richard Nixon’s political career—as both a chronicle and a corrective. Three factors, arguably, make it difficult to look back on the 1960 election and its contestants with adequate objectivity: Kennedy’s assassination in 1963, Nixon’s ugly public demise in the aftermath of Watergate in 1972–74, and The Making of the President 1960, Theodore H. White’s near-real time account of the election. White’s thrilling and wildly popular book lionized Kennedy, disparaged Nixon, and served not only as a template for how many would remember and write about the election, but also for future first-person election coverage. What’s more, Gellman argues, White’s “first draft of history” canonized distortions and misrepresentations that persist to this day.

Gellman’s characterization of White’s book is not inaccurate. White, like most other reporters who followed the candidates, greatly preferred Kennedy, and led them to overstate his strengths and minimize his shortcomings with a fervor that New York Times Washington correspondent Russell Baker likened to “brainwashing.” (Keep in mind that Kennedy, however dazzling an orator, razor-sharp a thinker, and masterful a campaigner, was at the time a 14-year legislator of no great distinction.) White and others portrayed him as a visionary poised to lead the country into an exciting new frontier, while representing Nixon as a drab and untrustworthy alternative, stuck in the alleged inertia of the Eisenhower era, and lacking in new ideas or true convictions.

However, Gellman’s insistence that White’s mythic version of events survives unchallenged seems overdrawn. While Gellman is almost certainly, as he contends, the first researcher to devote equal time and attention to mining the Nixon archives as the more popular Kennedy and Johnson collections, other recent books on the election, such as W. J. Rorabaugh’s The Real Making of the President 1960, Thomas Oliphant and Curtis Wilkie’s The Road to Camelot, Paul and Stephen Kendrick’s Nine Days: The Race to Save Martin Luther King Jr.’s Life and Win the 1960 Election, Edmund Kallina’s Kennedy v. Nixon, or David Pietrusza’s 1960: LBJ vs. JFK vs. Nixon: The Epic Campaign that Forged Three Presidencies, move well beyond Teddy White, and rarely if ever parrot his interpretation of events.

Still, Gellman argues that the contributions of the “few scholars” who have dared to contradict Teddy White’s hagiographic version of the election have fallen “on deaf ears. The parade of books repeating White’s version of events continued.” While Campaign of the Century primarily serves to deliver a well-constructed and impeccably documented narrative of the election, the contention that few other accurate accounts exist, and that those that do exist have been routinely ignored, remains a central thesis of the book. Gellman’s does not contain his critical lit review within a foreword or an epilogue; it’s a constant.

Gellman makes a reasonable case that the most recent book on the 1960 election, Nine Days (published in early 2021) stands on one pillar of White’s thesis: that John and Robert Kennedy’s efforts to free Rev. Dr. Martin Luther King in the days before the election—when King faced hard time in Georgia for a minor traffic violation—galvanized the Black vote and turned the tide in the election. The Kendricks hardly follow White’s line in this regard, casting doubt on much of the familiar story, and making it clear that it was Kennedy staffers, sometimes operating without either brother’s knowledge (and mostly against their wishes), that brought the campaign to King’s aid.

Gellman also contends that the Black turnout for Kennedy, though certainly higher than for Stevenson in 1956, was just regression to the pre-Eisenhower mean, a predictable outcome of having a slightly stronger candidate on the Democratic side and a less wildly popular one on the Republican side. But that doesn’t necessarily mean it wouldn’t have happened without Jack and Bobby’s famous phone calls, or the campaign’s determination to make the most of them. And it doesn’t invalidate Nine Days’ argument that the Kennedys’ intercession on King’s behalf, and Nixon’s failure to intervene or address the situation in any way proved one catalyst of the permanent party realignment to come.

Of course, the irony of the notion that Kennedy emerged from this crisis as a civil rights champion and Nixon as indifferent to King’s plight or opposed to integration didn’t accurately reflect the candidates’ positions, or their records up to that point. Gellman makes a strong case in the previous volume in this series, The President and the Apprentice—a deep dive into the Eisenhower-Nixon relationship—that Nixon lobbied hard to push through the administration’s two civil rights bills with their key provisions intact, and opposed Senate Majority Leader Lyndon Johnson’s efforts to weaken the 1957 bill to make it more palatable to southern segregationists, but largely toothless. (Gellman also constructs a narrative of the 1957 bill’s passage that runs contrary to Johnson biographer Robert Caro’s version in Master of the Senate.)

Kennedy, meanwhile, emerged as a supporter of the Dixiecrat-friendly provisions that weakened the bill; in Campaign of the Century, Gellman characterizes this as part of his pattern of Machiavellian cozying up to segregationists at opportune moments. Still, he argues, whatever efforts Kennedy made to woo Southern support ultimately fell short; Kennedy ran well behind his party in the 1960 election, and most of that differential came in the South (hardly a strike against him, given how thunderously Southern Democrats had been standing athwart history yelling “Stop!” since 1954).

Nixon’s failure to take the advice of some his aides and make overtures to southern conservatives who were already seeing the writing on the wall and leaning Republican likely prevented him from making greater inroads in the once-solid South, as he would eight and 12 years later.

One signature strength of Campaign of the Century—as with The Contender and The President and the Apprentice—is that Gellman provides a clear-eyed, and always rigorously researched examination of Richard Nixon exactly where he was in time, without the future bleeding in. If Campaign of the Century somewhat too often pits Nixon’s rhetoric against Kennedy’s record to establish that the vice president consistently took the higher road, always outspent but never outclassed—well, turnabout is fair play.

The book provides excellent analysis and blow-by-blow of the legendary presidential debates, and makes a characteristically cogent case that Teddy White’s influential narrative (many times debunked by now) is deeply flawed, and presents ample evidence that the impact of the debates on the election’s outcome have been generally overdrawn.

Campaign of the Century’s penultimate chapter, “Did He Win?”, which probes allegations of outcome-changing vote-stealing in Illinois and Texas—and of course includes Gellman’s merciless savaging of other historians who tend to gloss over it—makes for riveting if discomfiting reading. And if Richard Daley and Lyndon Johnson did, indeed, as some evidence suggests, steal the election from Nixon in 1960, did any two men do more to deliver him the White House in 1968?

Campaign of the Century brings much that’s new to this frequently but not always successfully covered topic, and along with Gellman’s earlier books, provides invaluable depth of insight on Richard Nixon at three critical stages of his career. What’s more, Gellman’s steadfast refusal to psychoanalyze the most complex and confounding president of the 20th century—a tendency most writers are helpless to resist—is both surprising and surprisingly refreshing, and that alone would make Campaign of the Century essential reading.