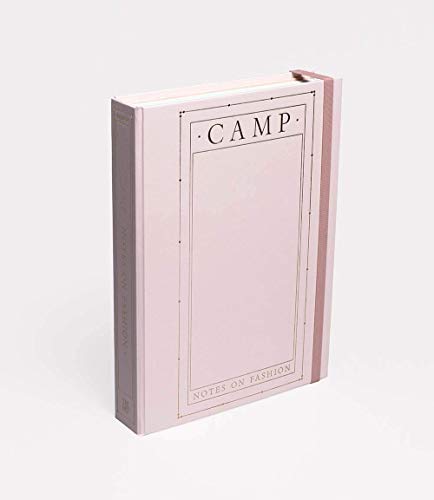 As a rule, museum fashion exhibits have centered around a facet of fashion that is either tangible, immediately recognizable, or something definitively specific that really doesn’t require any sort of explanation or definition. Then of course there are the multitude of exhibits that have featured a singular designer and their lifetime oeuvre. The Camp exhibit at the Metropolitan Museum of Art in New York City chose something ephemeral and used it as some sort of intellectual pursuit, which does not befit an exhibit of this magnitude.

“Camp is actually an enigmatic prism, a gemstone whose facets cast an evanescent stage for reflection and infraction, its instability and semiotic excess representing its ultimate value and raison d’être.” That should clear things up for the prospective reader!

CAMP: Notes on Fashion serves as the catalog for this show in a rather spectacular physical volume that is anything but camp! The physicality of the book is nothing short of extravagant and possibly even over the top as Camp seems to be defined within its text or by its sponsor, Gucci.

“The origins of camp are as obscure as the origins of the word camp. If camp is a transformative process and an effect of nominalist self-identification, its history is an act of retrospective transformation”

It is a rare occurrence in any book of the fashion genre that one’s intelligence is called into play in order to understand and explain the topic of the book/show. CAMP: Notes on Fashion not only challenges your intellect, trying to be illuminating, yet more successfully confounds the reader with the most philosophically esoteric and confounding text.

Historically, reviewing this type or subset of the fashion genre usually explains not the rationale or justification for a show but the history of the subject in a very straightforward manner. These books usually provide the reader with knowledge that is easily understood and does not read like a philosophical thesis on the topic/show.

While the opinions of a majority of those who have seen the actual exhibit claim it to be rather wonderful, the catalog does not elicit the same reaction. The text alone is enough to cause a brain ache while the photos seem rather unspectacular in comparison to other books of this genre.